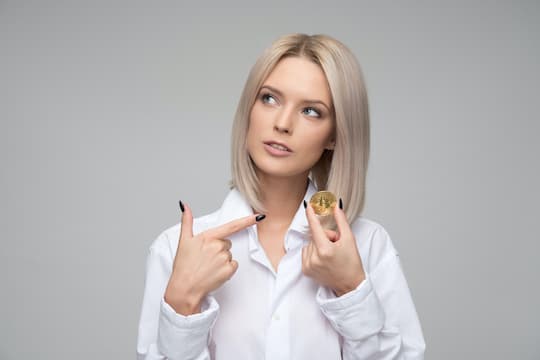 Intrinsic motivation is doing something for the pure pleasure of it, rather than for some external reward, such as money.

Intrinsic motivation, in psychology, refers to the type of motivation that comes from within.

Intrinsic motivation means doing something for its own sake and is often the healthiest and most powerful form of motivation.

In contrast, extrinsic motivation means doing something for an external reward, such as money or esteem.

Psychologists have found that while rewards can drive behaviour, they also have unexpected effects on people’s motivation.

Below are examples of intrinsic motivation, starting with a story about preschool children with much to teach all ages.

It demonstrates why rewards are sometimes not the best way to generate motivation in ourselves and others.

→ Try Dr Jeremy Dean’s motivation ebook: “Spark: 17 Steps That Will Boost Your Motivation For Anything”

Psychologists Mark R. Lepper and David Greene from Stanford University and the University of Michigan were interested in testing the effects of rewards on children (Lepper et al., 1973).

Since parents so often use rewards as motivators for children they recruited fifty-one preschoolers aged between 3 and 4.

All the children selected for the study were interested in drawing.

It was crucial that they already liked drawing because Lepper and Greene wanted to see what effect rewards would have when children were already fond of the activity.

The children were then randomly assigned to one of the following conditions:

Each child was invited into a separate room to draw for 6 minutes then afterwards either given their reward or not depending on the condition.

Then, over the next few days, the children were watched through one-way mirrors to see how much they would continue drawing of their own accord.

The graph below shows the percentage of time they spent drawing by experimental condition: 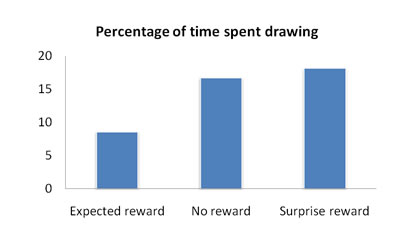 As you can see the expected reward had decreased the amount of spontaneous interest the children took in drawing (and there was no statistically significant difference between the no reward and surprise reward group).

So, those who had previously liked drawing (high intrinsic motivation) were less motivated once they expected to be rewarded for the activity.

In fact the expected reward reduced the amount of spontaneous drawing the children did by half.

Not only this, but judges rated the pictures drawn by the children expecting a reward as less aesthetically pleasing.

It’s not only children who display this kind of reaction to rewards, though, subsequent studies have shown a similar effect on intrinsic motivation in all sorts of different populations, many of them grown-ups.

In one study, smokers who were rewarded for their efforts to quit did better at first but after three months fared worse than those given no rewards and no feedback (Curry et al., 1990).

Once again, their intrinsic motivation to give up was reduced by rewards.

Indeed those given rewards even lied more about the amount they were smoking.

Rewards have even been found to make people less creative and worse at problem-solving.

So, what’s going on?

The key to understanding these behaviours lies in the difference between intrinsic and extrinsic motivation.

When we do something for its own sake, because we enjoy it or because it fills some deep-seated desire, this is intrinsic motivation.

On the other hand when we do something because we receive some reward, like a certificate or money, this is extrinsic motivation.

The children in the study above were chosen in the first instance because they already liked drawing and they were already had intrinsic motivation to draw.

It was pleasurable, they were good at it and they got something out of it that fed their souls.

Then, some of them got a reward for drawing and their intrinsic motivation changed.

Before they had been drawing because they enjoyed it, but now it seemed as though they were drawing for the reward.

This provided too much justification for what they were doing and so, paradoxically, afterwards they drew less.

This is the overjustification hypothesis for which Lepper and Greene were searching and although it seems like backwards thinking, it’s typical of the way the mind sometimes works.

When money makes play into work

Not only this but rewards are dangerous for another reason: because they remind us of obligations, of being made to do things we don’t want to do.

Children are given rewards for eating all their food, doing their homework or tidying their bedrooms.

So, rewards become associated with painful activities that we don’t want to do.

The same goes for grown-ups: money becomes associated with work and work can be dull, tedious and painful.

When we get paid for something we automatically assume that the task is dull, tedious and painful—even when it isn’t.

That is why play can become work when we get paid and intrinsic motivation reduces.

The person who previously enjoyed painting pictures, weaving baskets, playing the cello or pretty much anything else, suddenly finds the task tedious once money has become involved.

Yes, sometimes rewards do work, especially if people really don’t want to do something.

But when tasks are inherently interesting to us rewards can damage our intrinsic motivation by undermining our natural talent for self-regulation.

Since intrinsic motivation is so powerful, it is useful to know how to increase it.

Here are some useful methods to explore for increasing intrinsic motivation for a task:

→ There are many effective strategies for motivation in PsyBlog’s motivation ebook: “Spark: 17 Steps That Will Boost Your Motivation For Anything”