Doodling: The Mental Benefits To Memory And Concentration 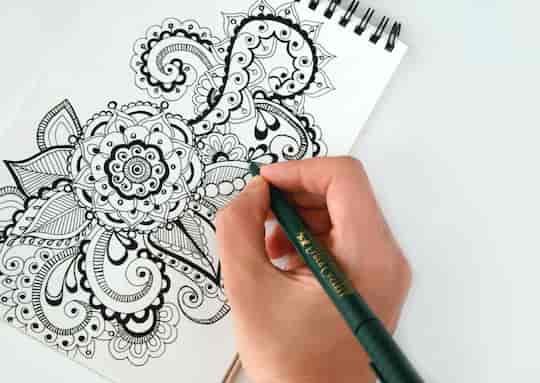 Doodling is more than just a pleasant waste of time and paper — it boosts memory, concentration and blood flow to the brain.

All sorts of claims have been made for the power of doodling: from it being an entertaining or relaxing activity, right through to it aiding creativity, or even that you can read people’s personalities in their doodles.

The idea that doodling provides a window to the soul is probably wrong.

These ideas about doodling can seem intuitively attractive but it falls into the same category as graphology: it’s a pseudoscience (psychologists have found no connection between personality and handwriting).

Although it’s probably a waste of time trying to interpret a doodle, could the act of doodling itself still be a beneficial habit for attention and memory in certain circumstances?

To test this out Professor Jackie Andrade at the University of Plymouth had forty participants listen to a mock answerphone message which was purportedly about an upcoming party (Andrade, 2009).

Crucially, these participants were pretty bored.

They’d just finished another boring study, were sitting in a boring room and the person’s voice in the message was monotone.

The question is: even though the task is pretty simple, would they be able to concentrate long enough to note down the right names?

Half the participants were told to fill in the little squares and circles on a piece of paper while writing down the names — this is the simplest form of doodling.

The rest just listened to the message, only writing down the names.

Looking at the results, the beneficial effects of doodling are right there.

Non-doodlers wrote down an average of seven of the eight target names.

But people doodling wrote down an average of almost all eight names.

It wasn’t just their attention that was enhanced, though, doodling also benefited memory.

Afterwards, participants were given a surprise memory test, after being specifically told they didn’t have to remember anything.

So perhaps if you’re stuck in a boring meeting or someone is droning on at you about something incredibly uninteresting, doodling can help you maintain enough focus to pull out the salient facts.

Doodling in particular boosts the blood flow through the prefrontal cortex.

The prefrontal cortex (above the eyes) is the area of the brain linked to regulating our higher functions like our thoughts, feelings and actions.

The study had both artists and non-artists either doodling, free drawing or colouring between the lines.

For artists, doodling was linked to slightly higher levels of brain activity.

“This shows that there might be inherent pleasure in doing art activities independent of the end results.

Sometimes, we tend to be very critical of what we do because we have internalized, societal judgements of what is good or bad art and, therefore, who is skilled and who is not.

We might be reducing or neglecting a simple potential source of rewards perceived by the brain.

And this biological proof could potentially challenge some of our assumptions about ourselves.”

Why doodling is beneficial

But why does it work?

We can’t tell from this study but Andrade speculates that doodling helps people concentrate because it stops their minds wandering but doesn’t (in this case) interfere with the primary task of listening.

When people are bored or doing a simple task, their minds naturally wander.

We might think about our weekend plans, that embarrassing slip in the street earlier or what’s for supper.

Perhaps doodling, then, keeps us sufficiently engaged with the moment to pay attention to simple pieces of information.

It’s like keeping the car idling rather than turning it off.

On idle we’re still paying some attention to our surroundings rather than totally zoning out.

Obviously doodling is not a task you want to indulge in while concentrating on a complicated task, but it may help you maintain just enough focus during a relatively simple, boring task, that you can actually get it done better.

Research on doodling might sound a little trivial but it’s fascinating because it speaks to us about many facets of human psychology, including mind wandering, zoning out, attention and the nature of boredom.

Plus it’s a really nice idea that doodling has a higher purpose, other than just wasting time and paper.