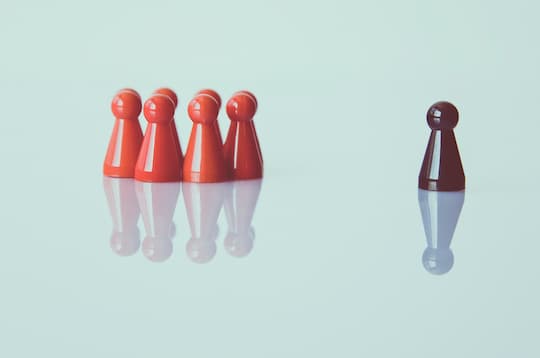 Social identity theory helps to explain why people’s behaviour in groups is fascinating and sometimes disturbing.

People gain part of their self from the groups they belong to and that is at the heart of social identity theory.

It explains why as soon as humans are bunched together in groups we start to do odd things: copy other members of our group, favour members of own group over others, look for a leader to worship and fight other groups.

Just glance at Sherif’s Robbers Cave experiment for proof of how easy it is to provoke war between groups.

But think about the types of groups you belong to, or ‘in-group’ as social identify theory has it, and you’ll realise they differ dramatically.

Some groups are more like soldiers in the same unit or friends who have known each other from childhood.

Long-standing, tight-knit, protecting each other.

Perhaps it’s not surprising people in these groups radically change their behaviour, preferring members of their own group over others, referred to in social identity theory as an ‘out-group’, in many ways.

Other groups, though, are much looser.

Supporters of a large sports club, for example, or work colleagues only together on a project for a few months or even a group of people in an art gallery appreciating a painting.

It seems impossible that people stood together for only 30 seconds to look at a painting can be said to form a group in any measurable way.

Surely it’s too fleeting, too ephemeral?

This is exactly the type of question social psychologist Henry Tajfel and colleagues set out to answer in the development of social identity theory (Tajfel et al., 1971).

They believed it was possible for a group, along with its attendant prejudices, to form at the drop of a hat.

In fact they thought a group could form even when there was no face-to-face contact between members, none of the people knew each other and their ‘group’ behaviour had no practical consequences.

In other words, they had absolutely nothing to gain (or lose) from this barely existent group (although social identity theory shows this statement is not quite right).

Tajfel and colleagues came up with a neat solution for testing their idea, which is referred to as the minimal group paradigm.

From this experiment and others like it Henry Tajfel developed social identity theory.

Participants, who were 14 and 15 year-old boys, were brought into the lab and shown slides of paintings by Klee and Kandinsky.

They were told their preferences for the paintings would determine which of two groups they would join.

Of course, this was a lie designed to set up the idea of ‘us’ and ‘them’ in their minds.

The experimenters wanted two groups of boys with not the faintest idea who was also in their own group or what the grouping meant or what they had to lose or gain.

After this setup, the boys were taken to a cubicle, one at a time.

Each was then asked to distribute virtual money to the other members of both groups.

The only information they had about who they were giving it to was a code number for each boy and that boy’s group membership.

There were a series of rules for the distribution of the money that were designed to tease out who the boys favoured: their own group or the other group.

The rules were changed slightly in different trials so that it was possible to test a number of theories.

Did the boys distribute the money:

Findings from the minimal group paradigm

From the way the virtual money was distributed, the boys did indeed demonstrate the classic behavioural markers of group membership predicted by social identity theory: they favoured their own in-group over the other out-group.

And this pattern developed consistently over many, many trials and has subsequently been replicated in other experiments in which groups were, if you can believe it, even more minimal.

When I first came across this experiment, my first reaction was to find it startling.

But, the most puzzling aspect of this experiment is that the boys had nothing whatsoever to gain from favouring their own group – there didn’t seem to be anything riding on their decisions.

Out in the real world there’s a good reason to favour your own group – normally it is also advantageous to yourself.

What Tajfel argued, though, was that there was something riding on the decisions the boys made, but it was something very subtle, yet incredibly profound.

Tajfel argued that people build their own identities from their group memberships.

For example, think of each of the groups you belong to: say at work, or within your family.

Part of who you are is probably defined by these groups (an important component of social identity theory).

Putting it the other way around: the nature of your group memberships define your identity.

As our group membership forms our identity, it is only natural for us to want to be part of groups that are both high status and have a positive image.

Crucially though, high status groups only have that high status when compared to other groups.

In other words: knowing your group is superior requires having a worse group to look down upon.

Seen in the light of social identity theory, then, the boys in the experiment do have a reason to be selfish about the allocation of the virtual cash.

Criticisms of the minimal group paradigm

No experiment can, or should, be automatically taken at face value.

Questions have to be asked about whether it is really telling us what the authors claim.

There are two criticisms often levelled at this experiment and its interpretation in light of social identity theory:

Despite these criticisms, Tajfel and colleagues’ findings have stood the test of time.

The experiment, or something like it, has been repeated many times with different variations producing much the same results.

Social identity theory states that our identities are formed through the groups to which we belong.

As a result we are motivated to improve the image and status of our own group in comparison with others.

Tajfel and colleagues’ experiment shows that group membership  in social identity theory is so important to us that we join the most ephemeral of groups with only the slightest prompting.

We will then go out of our way to make our own group look better compared to others.

The simple fact of how important group membership is to us, and how easily we join groups, often without realising it, is both a subtle and profound observation about human nature.