How Many Emotions Are There?

Analysis of the 42 facial muscles which create emotional expressions reveals how many emotions there are.

How many basic human emotions are there?

Well, it depends who you believe.

Robert Plutchik, whose theories on the emotions were influential, thought there were eight primary emotions:

He arranged them in a wheel to emphasise the idea that emotions can blend with each other, like colours, to create new emotions.

On the wheel shown below, the most intense emotions are in the middle, with milder emotions towards the outside. 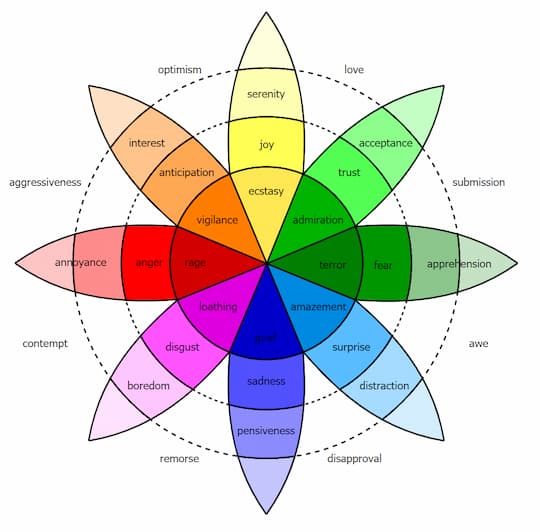 Until recently many psychologists went along with the idea that there are six basic emotions:

This theory is largely down to psychologist Paul Eckman who came up with the scheme in the 1970s.

It is based on research finding that across different and varied cultures these six emotions are universally recognised.

Later on, though, Eckman added many more emotions to the list including amusement, awe, contentment, desire, embarrassment, pain, relief and sympathy.

More recent research from the University of Glasgow has challenged the established view that there are six basic emotions: anger, fear, surprise, disgust, happiness and sadness.

Instead there may only be four.

To reach their conclusions, Jack et al. (2014) looked at how the muscles in the face move when expressing a variety of emotions.

They found that fear and surprise shared a common signal — the eyes are wide open — suggesting they only constitute one basic emotion, not two.

Similarly, for anger and disgust they found that the nose initially wrinkles.

Anger and disgust may, therefore, constitute only one basic emotion.

No anger and disgust?

None of this is to say that anger and disgust don’t exist as separate emotions, of course they do.

Rather it’s to suggest that anger and disgust only become obvious after the facial emotion has been given time to evolve, even if this development typically only takes a fraction of a second.

The authors argue that the facial expression associated with the basic emotions have an evolutionary function.

“First, early danger signals confer the best advantages to others by enabling the fastest escape.

Secondly, physiological advantages for the expresser–the wrinkled nose prevents inspiration of potentially harmful particles, whereas widened eyes increases intake of visual information useful for escape–are enhanced when the face movements are made early.”

The theory is that there are four biologically basic emotions — anger, fear, happiness and sadness — on top of which have evolved much more complex varieties of emotion over the millennia.

This doesn’t suggest that our emotions are any less complex, just that the basic building blocks could be four rather than six.

After all, the full complexity of life on earth is made possible from a sequence of just four nucleobases in DNA, commonly abbreviated to the letters G, A, T and C (guanine, adenine, thymine, and cytosine).

It’s the development of facial emotions over time that gives them their complexity:

“What our research shows is that not all facial muscles appear simultaneously during facial expressions, but rather develop over time supporting a hierarchical biologically-basic to socially-specific information over time.”