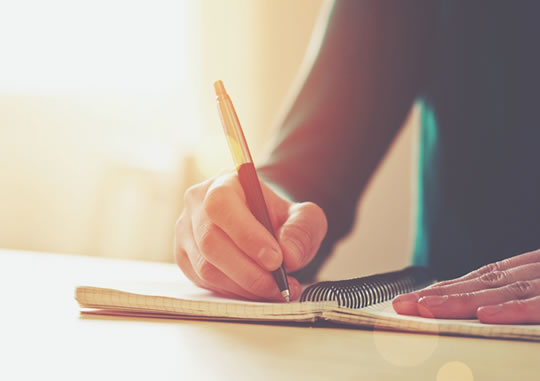 Parkinson’s is a neurological condition caused by loss of brain cells in a critical area of the brain.

Small changes to handwriting can be the first sign of Parkinson’s disease, research finds.

People with Parkinson’s often notice their handwriting becoming smaller and more cramped together.

It may also be more difficult to write for longer periods of time.

The changes are caused by the onset of muscle stiffness in the hands and fingers caused by Parkinson’s.

Other symptoms of Parkinson’s include stiff limbs and problems standing or walking.

The conclusions come from a study of 40 adults, half of whom were known to be in the first stages of Parkinson’s disease.

They were asked to write their names and copy some addresses.

Computer analysis of their handwriting was able to determine with 97.5% accuracy who had a Parkinson’s diagnosis.

Along with smaller writing and pressing down more softly, people with Parkinson’s spent longer with their pen in the air.

“This finding is particularly important because while the patient holds the pen in the air, his mind is planning his next action in the writing process, and the need for more time reflects the subject’s reduced cognitive ability.

Changes in handwriting can occur years before a clinical diagnosis and therefore can be an early signal of the approaching disease.”

“Identifying the changes in handwriting could lead to an early diagnosis of the illness and neurological intervention at a critical moment.”

The study was published in the Journal of Neurology (Rosenblum et al., 2013).