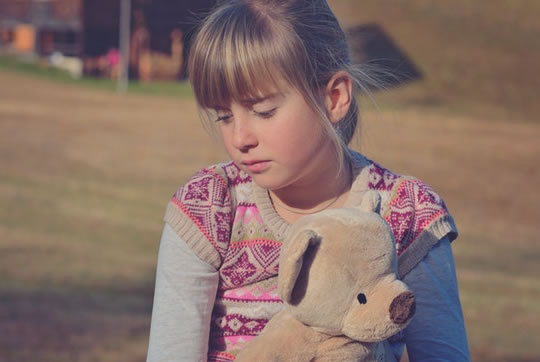 A common childhood complaint that hints at depression and anxiety later on.

The study of children who were separated from their biological parents at a young age found they experienced more gut problems.

Brain scans revealed that gut problems were also linked to abnormal activity in parts of the brain that process emotions.

The finding raises the prospect that probiotics may help treat some people.

The gut-brain link is underlined by the fact that over half of adults with irritable bowel syndrome have a history of trauma or abuse.

This is twice the rate of those without childhood traumas.

“One common reason children show up at doctors’ offices is intestinal complaints.

Our findings indicate that gastrointestinal symptoms in young children could be a red flag to primary care physicians for future emotional health problems.”

The study included 115 adopted children and 229 children raised by their biological parents.

The results showed that children with disrupted childhoods were more likely to suffer from constipation, stomach aches, nausea and vomiting.

“Our study is among the first to link disruption of a child’s gastrointestinal microbiome triggered by early-life adversity with brain activity in regions associated with emotional health.”

The researchers took a closer look at 8 children from each group, carrying out brain scans and gene sequencing.

These demonstrated that those with disrupted childhoods had less diversity of bacteria in their gut.

Brain scans showed that patterns of activity were also linked to the types of bacteria in their gut.

“It is too early to say anything conclusive, but our study indicates that adversity-associated changes in the gut microbiome are related to brain function, including differences in the regions of the brain associated with emotional processing.”

“Animal studies tell us that dietary interventions and probiotics can manipulate the gut microbiome and ameliorate the effects of adversity on the central nervous system, especially during the first years of life when the developing brain and microbiome are more plastic.

It is possible that this type of research will help us to know if and how to best intervene in humans, and when.”

The study was published in the journal Development and Psychopathology (Callaghan et al., 2019).