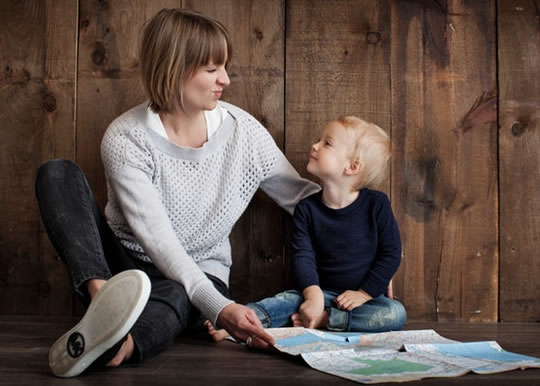 The children ate better, slept better and were in stronger control of their emotions.

Mothers who believe they have control over their lives raise smarter children, new research finds.

Psychologists call it an ‘internal locus of control’ and people with this trait do not blame outside forces, or fate.

Instead, they believe in choice and consequences.

Mothers who think like this have children who score better in tests of maths and science.

These mothers were also more likely to:

As a result of believing that what they do matters, children eat better, sleep better and are in stronger control of their emotions.

“It is widely known that the locus of control of a child is strongly associated with their academic achievements but until now we didn’t know if mothers’ locus of control orientation during pregnancy had a role to play in early childhood.

Thanks to the longitudinal data from Children of the 90s study we can now make these associations.”

The Children of the 90s study started with 14,541 pregnant women in England who have been followed since 1992.

The results showed that mothers who had an internal locus of control brought up smarter children.

“Internal parents believe that they have behavioural choices in life.

…when they expect life outcomes to be linked to what they do their children eat better, sleep better and are better able to control their emotions.

Such children later in childhood are also more likely to have greater academic achievements, fewer school related personal and social difficulties and less likelihood of being obese.

Parents are not necessarily stuck with how their current locus of control, said Professor Nowicki:

“It is possible for a parent to change their outlook; we’ve demonstrated in the past that parents who become more internal (i.e. learn to see the connections between what they do and what happens to their children) improved their parenting skills which would have a positive effect on their children’s personal, social and academic lives.”

The study was published in the journal Frontiers in Psychology (Golding et al., 2019).