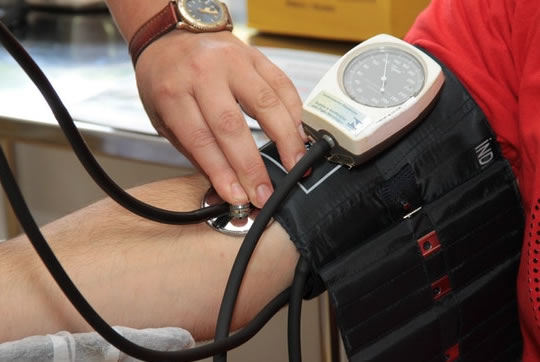 Fifty-year-olds with blood pressure of more than 130/80 had the increased risk, a new study of over 9,000 people in the UK has found.

This level is only somewhat elevated (120/80mmHg is the top of the ideal range) and below the level at which hypertension is normally treated with drugs.

“Our analysis suggests that the importance of mid-life hypertension on brain health is due to the duration of exposure.

So we see an increased risk for people with raised blood pressure at age 50, but not 60 or 70, because those with hypertension at age 50 are likely to be ‘exposed’ to this risk for longer.”

It is hoped the finding will allow scientists to spot the damage when there is still a chance to treat it.

Dementia begins to damage the brain long before any symptoms emerge — at this point it is usually too late to treat it.

“The problem is that neurological alterations related to hypertension are usually diagnosed only when the cognitive deficit becomes evident, or when traditional magnetic resonance shows clear signs of brain damage.

In both cases, it is often too late to stop the pathological process”

The results come from hypertension patients given brain scans with a powerful 3-tesla MRI machine.

They found that people with high blood pressure had damage to critical parts of their brains.

“We have been able to see that, in the hypertensive subjects, there was a deterioration of white matter fibers connecting brain areas typically involved in attention, emotions and memory,

An important aspect to consider is that all the patients studied did not show clinical signs of dementia and, in conventional neuroimaging, they showed no signs of cerebral damage.

Of course, further studies will be necessary, but we think that the use of tractography will lead to the early identification of people at risk of dementia, allowing timely therapeutic interventions.”

The studies were published in the European Heart Journal and the journal Cardiovascular Research (Abell et al., 2018; Carnevale et al., 2018).