How Most People Are Killing Their Productivity 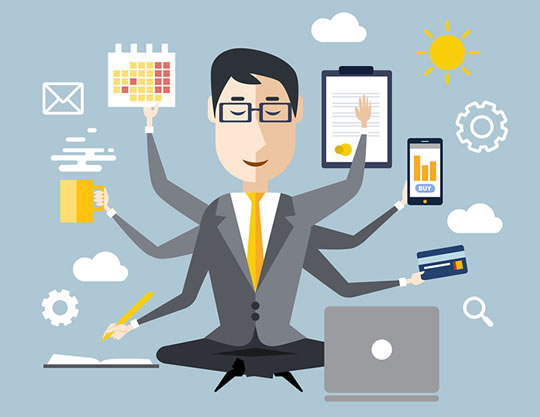 It can feel really good but it is reducing productivity by up to 40%.

Multitasking can reduce productivity by up to 40%, research finds.

And now brain scans show why.

Changing from one activity to another interferes with brain activity.

This makes the end result much worse than if we focus on one thing at a time.

Dr Iiro Jääskeläinen, a neuroscientist and one of the study’s authors, said:

“We used functional magnetic resonance imaging to measure different brain areas of our research subjects while they watched short segments of the Star Wars, Indiana Jones and James Bond movies.”

Sometimes the films were cut into 50 second fragments, other times they watched full 6.5 minute segments.

Obviously, in reality, we would hope to focus on one task for more than 6.5 minutes — but this is just to simulate the effects of task switching.

The scans tracked the areas of the brain that are important in understanding narratives.

The results showed that the brain works more efficiently when only tracking one task at a time.

Dr Jääskeläinen said that completing one task a day beats trying to do a dozen things at once.

The problem is that multitasking can feel good, despite being less efficient:

“It’s easy to fall into the trap of multitasking.

In that case, it seems like there is little real progress and this leads to a feeling of inadequacy.

“Social media is really nothing but multitasking, with several parallel plots and issues.

You might end up reading the news or playing a game recommended by a friend.

From the brain’s perspective, social media only increases the load.”

Perhaps worse, multitasking could even be causing changes to the structure of the brain, a 2014 study found:

“Using laptops, phones and other media devices at the same time could be shrinking important structures in our brains, a new study may indicate.

For the first time, neuroscientists have found that people who use multiple devices simultaneously have lower gray-matter density in an area of the brain associated with cognitive and emotional control.”

The study was published in the journal Human Brain Mapping (Lahnakoski et al., 2017).