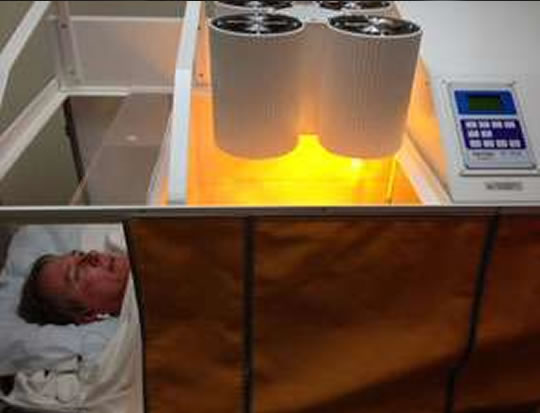 Could it be better than antidepressants and with fewer side-effects?

Inducing a mild fever in people with depression can relieve their symptoms for up to six weeks, new research finds.

The study suggests that ‘whole-body hyperthermia’ might be a useful new treatment for depression.

“Our hope is to find better and faster-acting treatments for depression than the antidepressants currently in use.

We think that using heat to stimulate the skin activates serotonin-producing cells in the mid-brain, which then produce a change in how the brain functions.

In a way, one might think of this pathway from the skin to the brain as a deep-brain stimulator crafted by evolution.

We tap into this pathway because heat makes the brain feel happy.”

The small study included 16 people with depression who had their body temperature raised to 38.5 degrees Celsius or 101.3 degrees Fahrenheit.

This is around the temperature of a mild fever.

They were compared with another group who received a placebo treatment involving fans and lights which did not actually heat them up.

“Our sham intervention was so realistic that most of the participants (10 of 14) thought they were receiving the real treatment.”

People in the real treatment condition were heated with infrared lights and coils over about an hour and half.

They were then left to cool down for around an hour.

Participant were followed up two, four and six weeks later.

Those who received the real treatment improved by about one level of depression severity.

“We were surprised to see that the effect (of reduced depression symptoms) was still present six weeks after the initial treatment.”

The researchers think the treatment works partly because it stimulates parts of the brain involved in the regulation of mood, such as the orbitofrontal cortex.

Extreme heat may also help to shift people’s focus from their own thoughts onto what is going on in the outside world.

In other words it could be an adaptive response to the heat.

Hyperthermia has been used as a cancer treatment in Europe for years, but this is some of the first work applying it to depression.

The study was published in the journal JAMA Psychiatry (Clemens et al., 2016).

Image courtesy of the University of Wisconsin-Madison