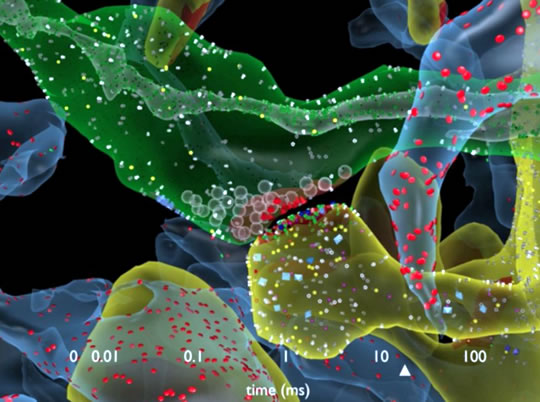 The picture above shows a synapse between an axon (green) and dendrite (yellow).

A human brain could hold as much information as the entire internet, a new study finds.

Human memory capacity is in the petabyte range, researchers at the Salk Institute have now found.

This is ten times larger than was previously thought.

“This is a real bombshell in the field of neuroscience.

We discovered the key to unlocking the design principle for how hippocampal neurons function with low energy but high computation power.

Our new measurements of the brain’s memory capacity increase conservative estimates by a factor of 10 to at least a petabyte, in the same ballpark as the World Wide Web.”

The conclusions come from an analysis of the brain’s synapses.

The synapses are junctions where much of our brain’s thinking and processing ‘happens’.

The scientists used advance microscopy to image the synapses and they discovered something fascinating.

It turns out that the synapses come in way more sizes than was previously.

This means human memory capacity is much larger than previously though, explained Tom Bartol, a Salk staff scientist:

“Our data suggests there are 10 times more discrete sizes of synapses than previously thought.

In computer terms, 26 sizes of synapses correspond to about 4.7 “bits” of information.

Previously, it was thought that the brain was capable of just one to two bits for short and long memory storage in the hippocampus.

This is roughly an order of magnitude of precision more than anyone has ever imagined.”

“We were amazed to find that the difference in the sizes of the pairs of synapses were very small, on average, only about eight percent different in size.

No one thought it would be such a small difference.

This was a curveball from nature.”

“The implications of what we found are far-reaching.

Hidden under the apparent chaos and messiness of the brain is an underlying precision to the size and shapes of synapses that was hidden from us.”

The study was published in the journal eLife (Sejnowski et al., 2016).