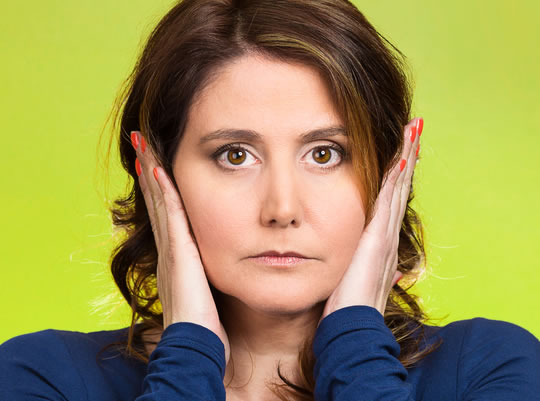 Hearing voices is much more common than you might think.

The experience of hearing voices is common and much more variable than previously thought, a new study finds.

Many people who do not have a psychiatric diagnosis hear voices.

It is thought between 5 and 15% of people will experience hearing voices at some point in their lives (scroll down for Rachel’s story).

Researchers asked 153 people about their experiences of hearing voices.

Most of them (81%) said they heard more than one voice, with 70% saying they heard specific characters.

Only around half the people said their voices were purely sounds they heard.

Almost half said they were more thought-like voices or somewhere in between sounds and thoughts.

These included tingling or hot sensations in the hands or feet.

Dr Nev Jones, one of the study’s authors, said:

“By and large, these voices were not experienced simply as intrusive or unwanted thoughts, but rather, like the auditory voices, as distinct ‘entities’ with their own personalities and content.

This data also suggests that we need to think much more carefully about the distinction between imagined percepts, such as sound, and perception.”

Rachel Waddingham is a former psychiatric patient who has successfully rejected the labels, and the medications, to live alongside her voices.

Each of them is different — some have names, they are different ages and sound like different people.

Some of them are very angry and violent, others are scared, and others are mischievous.

Sometimes, I hear a child who is very frightened.

When she is frightened I can sometimes feel pains in my body — burning.

If I can help the voice calm down, by doing some grounding strategies, the burning pains stop.

Since going to a Hearing Voices Group, I have found ways of making sense of and coping with my voices.

I no longer feel terrorised by them even though some of them say some very frightening things.

I now have a family of voices and have a better relationship with them.

I can make a choice about how I respond to them — whether I listen to them, and how I reply.

Some of them are now much more helpful — they can be a window to my feelings, letting me know about a problem that I have in my life that I need to address.

Although in our society, people who hear voices are often seen as ‘mad’ or ‘crazy’, I do think things are changing.

I find that lots of people are interested in voice-hearing.

Many people have told me about experiences they have had — either in their childhood, or as an adult.

It’s as if by talking about voices we are starting to de-stigmatise the experience and opening the door for others to speak openly too.

As long as we believe that voices are signs of pathology and illness, it makes little sense to really explore a person’s lived experience.

Instead we try to suppress or eliminate the voices as far as possible.

Listening to them seems ‘crazy’.

Still, in my experience it can be really useful to be interested in people’s lived experience of voice-hearing.

Every one of us is different, and being curious about my experiences was one of the first steps to dealing with them.

This research is a step forward.

If we want to understand more about voice-hearing, it makes sense to ask a voice-hearer — and be willing to modify our perception of what it means to hear voices based on their answers.

For me, the word ‘voices’ isn’t sufficient.

I use it, but it hides the embodied parts of my experience for which I have few words to describe.

I would like to live in a world where we are curious about one another’s experiences and seek to understand rather than pathologise.

Everyone has a story and the world would be much kinder if we started to listen to it.”

The study is published in the journal Lancet Psychiatry (Woods et al., 2015).

You can read more about Rachel’s story at her website.

Hands over ears image from Shutterstock