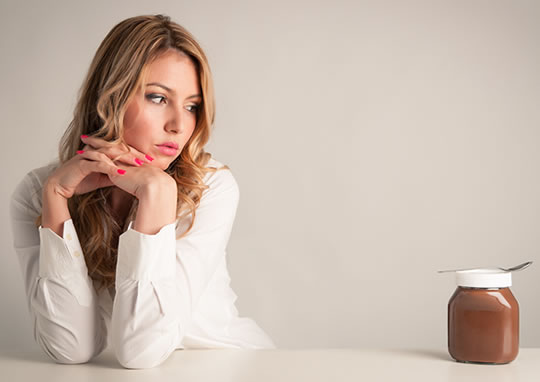 Reduce your appetite with this counter-intuitive mental trick.

Contrary to the common assumption that thinking about something will make you want it more, a study has found that for food it can do the opposite.

“These findings suggest that trying to suppress one’s thoughts of desired foods in order to curb cravings for those foods is a fundamentally flawed strategy.

Our studies found that instead, people who repeatedly imagined the consumption of a morsel of food — such as an M&M or cube of cheese — subsequently consumed less of that food than did people who imagined consuming the food a few times or performed a different but similarly engaging task.

We think these findings will help develop future interventions to reduce cravings for things such as unhealthy food, drugs and cigarettes, and hope they will help us learn how to help people make healthier food choices.”

Participants in a series of five experiments firstly either imagined eating some M&M’s or putting quarters into a laundry slot (Morewedge et al., 2010).

The results, published in the journal Science, showed that imagining eating M&M’s, as opposed to the control task, reduced how many M&M’s people subsequently ate.

The key is to imagine eating a specific food, rather than just thinking about that food or any food in general.

Further experiments also revealed that the technique works by reducing the motivation to eat that food.

It seems that the very process of imagining eating a food also starts the process of getting bored or tired of it.

Dr Joachim Vosgerau, a co-author of the study, explained:

“Habituation is one of the fundamental processes that determine how much we consume of a food or a product, when to stop consuming it, and when to switch to consuming another food or product.

Our findings show that habituation is not only governed by the sensory inputs of sight, smell, sound and touch, but also by how the consumption experience is mentally represented.

To some extent, merely imagining an experience is a substitute for actual experience.

The difference between imagining and experiencing may be smaller than previously assumed.”