Why Some People Only Need Five Hours’ Sleep a Night 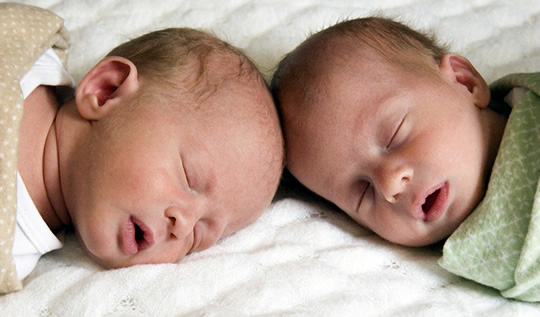 Study of twins explains how some people can function normally on 5 hours sleep.

A gene mutation which means a person can function normally with only five hours’ sleep a night has been identified by a study of 100 pairs of twins.

While most people can get by with less than six hours, the majority will suffer physically and psychologically, especially if sleep deprived over the long-term.

But this group of people with a variant of the ‘BHLHE41’ gene only need an average of five hours and likely suffer no ill-effects.

This type of twin study takes advantage of similarities and differences in the genetic code of identical and non-identical twins.

The 100 pairs of twins had their normal sleeping patterns measured, and then they were deprived of sleep for 38 hours (Pellegrino et al., 2014).

The results, published in the journal Sleep, showed that those carrying the target gene variant slept, on average, for five hours, which was one hour shorter than their twins without the gene.

When the twins were given cognitive tests after the sleep deprivation, those with the gene variant did better, making 40% fewer errors.

Not only that, but the carriers recovered more quickly from sleep deprivation, only requiring 8 hours recovery sleep, compared with their twins who needed 9.5 hours.

Dr. Renata Pellegrino, who is the study’s lead author, said:

The mutation was associated with resistance to the neurobehavioral effects of sleep deprivation.”

How much is enough?

The American Academy of Sleep Medicine recommends between 7 and 9 hours sleep for most people.

“This study emphasizes that our need for sleep is a biological requirement, not a personal preference.

Most adults appear to need at least seven hours of quality sleep each night for optimal health, productivity and daytime alertness.”

For the vast majority of people, regularly getting less than about 7 hours of sleep leads to concentration problems, lower energy levels, accidents and, in the long-term, raises the risk of depression.

The lucky few with this genetic mutation, though, can break this basic rule of sleeping.