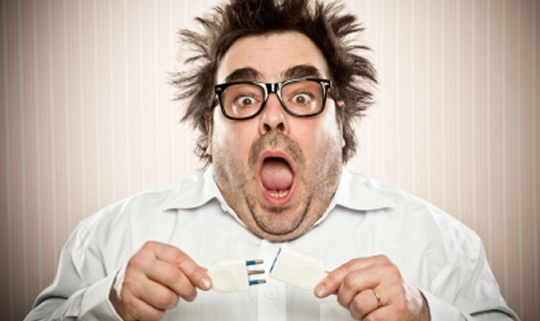 In psychology experiment one man shocked himself 190 times rather than sit doing nothing.

Most people would rather be doing something than sitting alone thinking, a new study finds, even if it involves self-administering a painful electric shock.

Across 11 studies, psychologists at the University of Virginia and Harvard University had people sitting on their own in a featureless room for between 6 and 15 minutes (Wilson et al., 2014).

Professor Timothy Wilson, who led the study, which is published in the journal Science, said:

“Those of us who enjoy some down time to just think likely find the results of this study surprising — I certainly do — but our study participants consistently demonstrated that they would rather have something to do than to have nothing other than their thoughts for even a fairly brief period of time.”

People consistently said that the short thinking period was not enjoyable and they found it difficult to concentrate.

Most people said they’d rather be listening to music or using their smartphones.

In the most dramatic finding from the research, participants were left alone in the room with a button which administered a mild electric shock to them.

Of the 18 men in the study, 12 gave themselves at least one shock over a 15-minute ‘thinking period’.

One unusually bored man pressed the button 190 times, although this was not typical.

Of the 24 women in the study, 6 gave themselves at least one shock.

The much higher rate amongst men is likely down to greater sensation-seeking amongst males.

The authors note that:

“What is striking is that simply being alone with their own thoughts for 15 minutes was apparently so aversive that it drove many participants to self-administer an electric shock that they had earlier said they would pay to avoid.” (Wilson et al., 2014).

This might look like evidence of a chronically distracted generation, but the findings were not confined to young people.

In one of the studies, people from 18 to 77-years-old, and from a wide range of backgrounds, took part.

The results were the same, Wilson said:

“That was surprising — that even older people did not show any particular fondness for being alone thinking.”

Wilson does not think these findings reflect the fast pace of modern society, rather a fundamental aspect of the way the mind works:

“The mind is designed to engage with the world.

Even when we are by ourselves, our focus usually is on the outside world. And without training in meditation or thought-control techniques, which still are difficult, most people would prefer to engage in external activities.”

It may also be that it’s difficult to daydream or let the mind wander when you are forced into it.

However, in one of the studies people were allowed to try the period of quiet reflection at home.

Wilson explained that the results were much the same:

“We found that about a third admitted that they had ‘cheated’ at home by engaging in some activity, such as listening to music or using a cell phone, or leaving their chair.”

And they didn’t enjoy this experience any more at home than at the lab.”