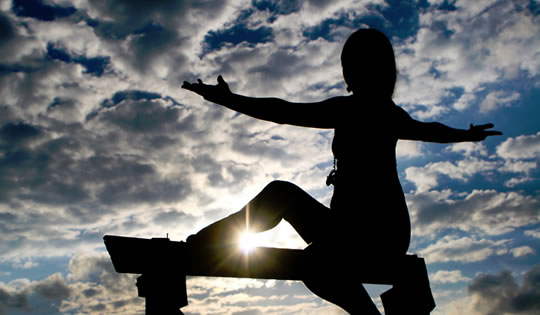 Feeling good: impressive results in study which tested yoga against a ‘metabolically matched’ amount of walking.

Yoga for an hour-and-a-half for each of twelve weeks was enough to increase GABA levels and boost mood.

In the control condition, the boost in GABA levels was not as great for those who did a similar amount of walking.

Low levels of GABA, or to give it its full name gamma-aminobutyric acid, have been linked to low mood and increased anxiety.

This is because GABA is broadly an inhibitory neurotransmitter in the mature brain, tending to calm the mind.

Drugs commonly prescribed for people experiencing depression or low mood are known to increase activity in the GABA system.

In the study, participants were given brain scans before and after the yoga or walking.

Comparing the results of the scans, researchers could see the changes in GABA levels.

After the interventions, people in the yoga group reported lower anxiety and better mood than those who had been walking.

Those with the greatest increase in GABA activity also experienced the largest boost in mood.

The study’s authors explain the significance of the results:

Dr Kim A. Jobst commented on the study:

“This is important work that establishes some objective bases for the effects that highly trained practitioners of yoga therapy throughout the world see on a daily basis. What is important now is that these findings are further investigated in long-term studies to establish just how sustainable such changes can be in the search for safe non-drug treatments for depression.”