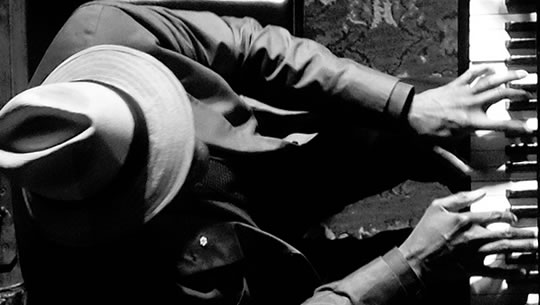 Brain regions that process language are also involved in communicating through music.

When jazz musicians are improvising, the areas of the brain activated include those associated with syntax and spoken language, a new brain imaging study finds.

The study had jazz musicians ‘trading fours’: which is where musicians each improvise four bars of music (Donnay et al., 2014).

Typically, trading fours is like a conversation. Each player picks up the themes of the other and elaborates, changes or ‘replies’ in some way.

This suggests that trading fours is more than just a metaphorical conversation, it activates the same areas of the brain involved in building sentences.

A fascinating nuance of the study was that although areas associated with syntax were activated, the areas of the brain associated with the meaning of language showed lower activation.

One of the study’s authors, Charles Limb, explained:

“We’ve shown in this study that there is a fundamental difference between how meaning is processed by the brain for music and language. Specifically, it’s syntactic and not semantic processing that is key to this type of musical communication. Meanwhile, conventional notions of semantics may not apply to musical processing by the brain.”

One musician lay inside the fMRI machine with a plastic piano and traded fours with another for ten minutes.

All the while the fMRI machine measured the brain’s activity.

“When two jazz musicians seem lost in thought while trading fours, they aren’t simply waiting for their turn to play. Instead, they are using the syntactic areas of their brain to process what they are hearing so they can respond by playing a new series of notes that hasn’t previously been composed or practiced.”