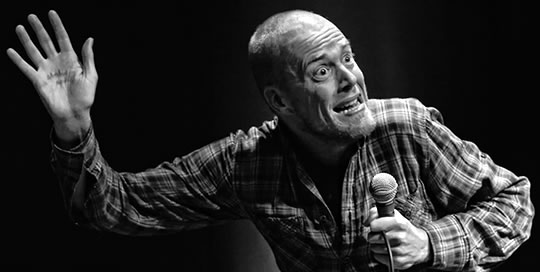 Comedians find it unusually difficult to feel pleasure and have a strange relationship with their audiences.

What makes a great comedian?

In comedy it’s often a matter of taste–one man’s comedian is another’s buffoon–but are there certain personality factors that make a comedian?

To find out a new study published in the British Journal of Psychiatry examined the personalities of comedians from the US, Britain and Australia (Ando et al., 2014).

They were inspired by the crossover between symptoms of psychosis and what’s needed to be funny, since…

“…humour involves ‘sudden, surprising shifts in the processing of information’. The creative elements needed to produce humour are strikingly similar to those characterising the cognitive style of people with psychosis (both schizophrenia and bipolar disorder).” (Ando et al., 2014).

The authors approached comedy societies and asked their members to anonymously fill in the Oxford–Liverpool Inventory of Feelings and Experiences (O-LIFE)–a scale that measures both bipolar and schizophrenic factors.

These personality structures were compared with a group of actors they also recruited, and with previously collected data on normal (!) people.

When the two groups were compared, what they found was that, compared with normal people, comedians had the following characteristics:

Actors, meanwhile, shared many of these personality traits with comedians, except they were close to the norm in feeling pleasure. Unlike the comedians, as a group, actors did not experience anhedonia.

One of the study’s authors, Gordon Claridge, explained:

“The creative elements needed to produce humor are strikingly similar to those characterizing the cognitive style of people with psychosis–both schizophrenia and bipolar disorder. Although schizophrenic psychosis itself can be detrimental to humor, in its lesser form it can increase people’s ability to associate odd or unusual things or to think ‘outside the box’.”

In having high levels of psychotic personality traits, comedians are similar to those in other creative fields.

The way they differed was in having unusual bipolar tendencies in their personalities.

They were both introverted and unsociable, but at the same time were also extraverted and had some manic-like traits.

One of the comedians in the study put it this way:

“I can say about myself that I don’t think I’m one specific way. Sometimes I’m extremely introverted or uncomfortable socially and other times I’m the life of the party type of person.” (Ando et al., 2014).

Indifference to the audience

Most fascinating were the authors’ speculations on the different ways comedians and actors relate to their audiences.

While actors want to genuinely engage the audience, comedians, tend towards emotionally indifference.

That’s why an actor wants your love but a comedian couldn’t care less, as long as you’re laughing.