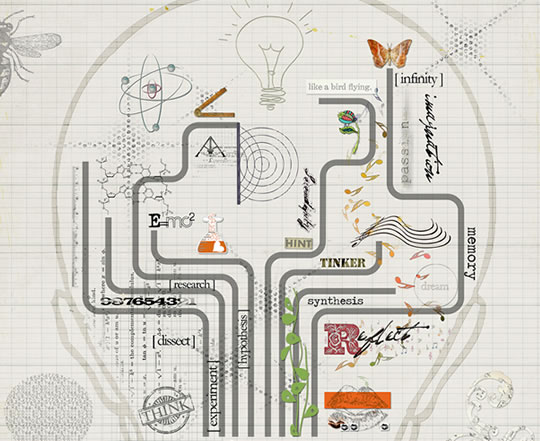 • Next article in this series: Remote Control of the Mind – Over the Internet

• Previous article: Like to Stay Up Late? Different Neural Structures Found in the Brains of Night Owls

Evidence from over 1,000 fMRI brain scans finds no evidence people are ‘right-brained’ or ‘left-brained’.

The idea behind this is that these two distinct types of personalities are a result of one half of the brain being more active than the other.

The evidence for this has always been very weak but now researchers have done much to debunk this idea by examining the functional Magnetic Resonance Imaging (fMRI) scans of over 1,000 people (Nielsen et al., 2013).

Each person was lying in the scanner thinking about nothing in particular for 5 to 10 minutes. These resting brain states were then analysed for evidence of more activity in either the right or left sides of the brain.

None of this means that some people aren’t more creative, while others more analytical and logical, just that it’s not accurate to say that creative people are more ‘right-brained’. It’s not their over-active right-brain that’s making them more creative; it’s their whole brain.

This finding also does not contradict the idea that some of the brain’s functions are biased towards the left- or right-hand-side.

For example, language processing is biased more towards the left-hand-side of the brain (in right-handed people), while attention is biased towards the right.

Although some functions are lateralised, then, one side isn’t dominant over the other in some people.

Despite having no solid basis in science, the expressions ‘left-brained’ and ‘right-brained’ will probably survive because it’s an easy way to talk about two aspects of personality.

But be aware that the expression is flawed: it’s far better to talk about people’s creativity or their analytical skills separately, rather than in opposition—especially since many people have plenty of both.

→ This post is part of a series on the 10 Most Awe-Inspiring Neuroscience Studies: