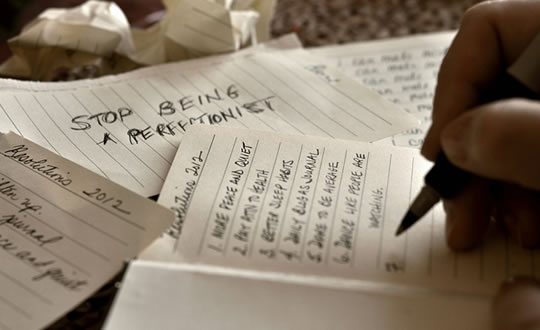 Are you tortoise or hare? For New Year’s resolutions it pays to go slow and make sure you get there.

One of the main reasons that New Year’s resolutions are so often forgotten before January is out is that they frequently require habit change.

And habits, without the right techniques, are highly resistant to change, as I explain in my new book ‘Making Habits, Breaking Habits‘.

But because habits work unconsciously and automatically, we can tap into our in-built autopilot to get the changes we want.

So here is my quick ten-step guide to making those New Year’s resolutions, based on the hundreds of psychology studies I cover in the book.

The classic mistake people make when choosing their New Year’s resolutions is to bite off more than they can chew. Even with the help of psychologists, people find it hard to make relatively modest changes. So pick something you have a reasonable chance of achieving. You can always run the process again for another habit once the first is running smoothly.

Choosing what to change about yourself and sticking to it isn’t easy. There is a method you can use, though, to help sort the good ideas from the bad, and to help boost your commitment.

Mental contrasting is described in more detail here but in essence it’s about contrasting the positive aspects of your change with the barriers and difficulties you’ll face. This helps you to be more realistic about what is possible.

Research has found that following this procedure makes people more likely to give up on plans that are unrealistic but also commit more strongly to plans they can do.

The types of plans for change people make spontaneously are vague: things like: “I will be a better person” or “This year I’ll get fit”.

These are fine as overall aims but it’s much better to make really specific plans that link situations with actions. For example, you might say to yourself: “If I feel hungry between meals, then I will eat an apple.” When repeated these types of actions will help you achieve your overall goals.

I talk more in my book about how to make these types of plans. The details are really important.

Habits build up by repeating the same action in the same situation. Each time you repeat it, the habit gets stronger. The stronger it gets, the more likely you are to perform it without having to consciously will it.

So, how long will the habit take to form? Well, it depends on both the habit you’ve chosen and your personality. The idea that it’s always 21 days is demonstrably wrong.

Everyone is different, so what works for one person might not work for another. Habit change is no different. If your very specific plan seems to be going wrong after a while, or doesn’t feel right, then it may need a tweak. Try a different time of the day or performing the habit in a different way.

Habit change needs self-experimentation. Are there any tweaks to your environment you can make? Those trying to change eating habits might try buying smaller plates, putting fruit on the counter and avoiding TV dinners.

An odd thing happens when we try to suppress thoughts: they come back stronger. It turns out that thought suppression is counter-productive. The same with habits: if you try to push the thought of cake out of your mind, suddenly it will be everywhere.

Habits cannot be killed off. It’s like the old saying that you never forget how to ride a bike. Old habits are lying there in the back of your mind waiting to be cued off by familiar situations.

It’s much better to plan a new good habit to replace the bad old one. Try to learn a new response to a familiar old cue. For example, if worrying makes you bite your nails, then, when you worry, do something else with your hands, like making a hot drink, or doodling.

There’s bound to be some competition between old and new habits at first. This is normal. Try to notice or anticipate what the mental danger points will be and plan for them.

For example, you may want to get up earlier but know that you’ll feel lazy when you wake up. Plan to think about something that will make you jump out of bed, like an activity you are looking forward to doing that day.

We’re most likely to give in to old habits when we’re tired, low and hungry. So pre-commit to your new habit when your self-control is strong.

For example, clear all the unhealthy food and drink out of the house, cut up the credit card or give the gaming controller to a friend for safe-keeping. Getting in the habit of planning ahead is one of the best ways of keeping your New Year’s resolutions.

Another trick to boost your self-control in the moment is to use self-affirmation. This involves simply thinking about something that is important to you, like your friends, family or a higher ideal. Studies suggest this can boost depleted willpower, even when your ideas aren’t connected to the habit you are trying to ingrain.

The habit of habit change

Once you’ve successfully ingrained a modest new habit, it’s time to go back to square one, choose a new habit to work on and start again.

This is the best, most sustainable path to self re-invention—forget about waking up tomorrow a totally different person. Instead go little-by-little, step-by-step, and eventually you will get there.

Forget all that haring around, be the tortoise.