Why Thought Suppression is Counter-Productive

How pushing a thought out of consciousness can bring it back with a vengeance.

It sometimes feels like our minds are not on the same team as us. I want to go to sleep, but it wants to keep me awake rerunning events from my childhood. I want to forget the lyrics from that stupid 80s pop song but it wants to repeat them over and over again ad nauseam.

This internal battle can be anything from the attempt to suppress an occasional minor irritation (did I turn off the cooker?) to a near-constant obstacle to everyday life. Perpetual thoughts of food drive people to obesity, persistent negative thoughts cue depression and traumatic events push back into consciousness to be relived over and over again.

The classic response to this mental wrangling — whether relatively trivial or deadly serious — is to try and forget about it, push it to the back of our minds or some other variation on the theme. Unfortunately counter to our intuition about what should work, psychological research has discovered in the last twenty years that this approach is not just wrong, but has the potential to make the situation worse. 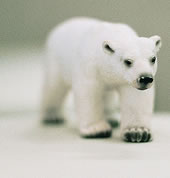 In the study that kicked off research in this area Professor Daniel Wegner and colleagues investigated the effects of thought suppression (Wegner et al., 1987). Participants were first asked to try not to think about a white bear for 5 minutes, then for the next 5 minutes asked to think about a white bear. Throughout the experiment participants verbalised whatever thoughts they were having and, each time they thought of a white bear, rang a bell.

Participants who first tried to suppress their thoughts rang the bell almost twice as often as participants in a control group. It appeared that the very act of first trying to suppress a thought made it fight back all the stronger.

This effect has subsequently been replicated by other researchers using different types of experiments and appears to be relatively robust (Wenzlaff & Wegner, 2000). The same results are even found when people are not directly instructed to suppress certain thoughts, but are merely encouraged to do so through subtle forms of manipulation. It has been dubbed the ‘post-suppression rebound effect’ and may well be crucial to many aspects of our everyday experience.

Since the discovery of the rebound effect researchers have probed the situations in which it occurs, especially how suppression interacts with emotions. Unsurprisingly thoughts more emotionally laden than white bears are particularly vulnerable to the rebound effect. In one study participants were asked to write about either an emotional or nonemotional everyday event (Petrie et al., 1998). It was the emotional events that were hardest for participants to suppress. It’s as if the emotional content of a thought makes it even more likely to push back against the attempt to suppress it.

But even if emotional events are particularly susceptible to the rebound effect, perhaps we get better at suppressing particular thoughts with practice? Maybe the reason people find it difficult to suppress the idea of a white bear is that it’s an unusual thought. Studies have, therefore, looked at how people manage when they are suppressing thoughts they are used to suppressing.

Wegner and Gold (1995) examined emotional suppression by delving into people’s romantic pasts using a neat comparison between ‘hot flames’  and ‘cold flames’. A ‘hot flame’ is a previous partner who still fires the imagination, while a ‘cold flame’ is a previous partner for whom the thrill is gone. In theory the ‘hot flame’ should produce more intrusive thoughts so people should have more practice suppressing them. Meanwhile because the cold flame doesn’t produce intrusive thoughts, people should have less practice suppressing them.

The results revealed exactly the expected pattern: people found it harder to to suppress thoughts about cold flames presumably because they had less practice.

Suppressing thoughts in the lab is one thing, though, suppressing them in real life, over a period of time, is quite another. To get an idea about suppression over longer time-frames, Trinder and Salkovskis (1994) asked people to monitor intrusive thoughts over four days. Compared with a control group, participants who tried to suppress negative intrusive thoughts found it more uncomfortable and moreover experienced more of the thoughts they were trying to suppress. It seems that even with practice thought suppression is likely to lead to the rebound effect in the long-run.

Back with a vengeance

Spurred on by these findings of the paradoxical effects of thought suppression, psychologists have uncovered this rebound effect in all sorts of other contexts. Here are some examples discussed by Wenzlaff and Wegner (2000):

These are just a few examples, studies have also looked at people’s attempts to suppress traumatic incidents, their prejudices, their physical pain and their obsessions. A familiar pattern emerges in many studies: the attempt to push away thoughts about pain, trauma or obsession brings them back with a vengeance.

So what is it about our minds that makes them so disobedient? Why, when we want to get rid of a thought from our heads does it come back stronger? Professor Daniel Wegner provides a neat explanation called ‘ironic processes theory’. This argues that the post-suppression rebound effect isn’t just some random consequence of how the brain is wired, but an integral part of the process of suppression itself (Wegner, 1994).

According to this theory, here’s what happens when I want to stop a recurrent thought in its tracks: First I distract myself by intentionally thinking about something else. Secondly, and here comes the irony, my mind starts an unconscious monitoring process to check if I’m still thinking about the thing I’m not supposed to be thinking about – you know, to check if the conscious process is working or not.

The trouble comes when I consciously stop trying to distract myself and the unconscious process carries on looking out for the thing I was trying to suppress. Anything it sees that looks vaguely like the target triggers the thought again and round I go in another loop of thinking the same thought I was desperately trying to forget about.

The irony of thought suppression, then, is that actively trying to manage our own minds can sometimes do more harm than good. Although it makes perfect intuitive sense to try and suppress unwanted thoughts, unfortunately the very process we use to do this contains the seeds of its own destruction. The more we try and push intrusive thoughts down, the more they pop back up, stronger than ever.