How to Spot an Untrustworthy Smile 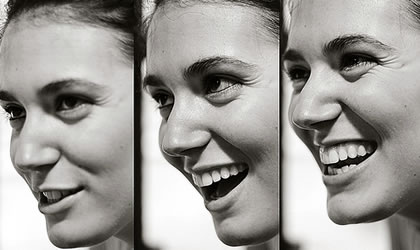 Humans produce about 50 distinct types of smiles but there’s one distinction that really matters: between real and fake.

Shown a picture, most of us can spot a fake smile as it tends to involve only the mouth. When people feel the positive emotions welling up, the smile also reaches upwards across the face, towards the eyes.

Look at the picture on the right (above), see the crinkles there around the eyes? That, along with the raising of the cheeks, bulging of the skin below the eye and narrowing of the eyelids means she’s feeling it.

In a picture it’s easy to spot but in real time it happens fast, so fast that Lucy Johnston and colleagues wondered if we can really spot the difference (Johnston et al., 2010). Can we tell an enjoyment smile from a non-enjoyment smile, and how do we use this information?

The news is good for our face reading abilities and bad for those hiding behind fake smiles. Across a series of experiments the researchers found that people:

“…spontaneously attend to, and differentiate between, enjoyment and non-enjoyment smiles in situations where issues of trust or cooperation were salient and, further, that such sensitivity would guide interactions in a socially adaptive manner.”

Despite the speed with which faces move, we can read whether or not smiles reflect real positive emotions. Not only that but our behaviour automatically changes depending on what type of smile we detect. Real enjoyment smiles send signals of trustworthiness and suggest people we can co-operate with.

Spotting the difference between real and fake can be crucial in everyday life:

“The ability to accurately detect the trustworthiness of others allows the perceiver to identify co-operators and reduces the risk of being exploited.”

Yes, most people produce fake smiles some of the time, usually to be polite. But when it matters and trustworthiness is important, we are remarkably good at automatically detecting real smiles and extending our trust.