What Alcohol Does to Your Mind: Attentional Myopia

Alcohol makes us attentionally ‘short-sighted’—this helps explain its popularity and its variable effects.

We tend to think of alcohol as primarily a disinhibitor, but this can’t really explain its varying effects. Sometimes it seems to make us loud and boisterous, sometimes quiet and contemplative, sometimes sad and depressed, along with all the shades and combinations of these, and other emotions.

Similarly psychologists have found that alcohol can have all sorts of counter-intuitive effects. Studies have even shown that after drinking people can become less aggressive and less likely to engage in risky sexual behaviours. Doesn’t sound like alcohol does it? So, how can we understand and explain all these different states?

Folk psychology (and research) tells us that some of the varying effects of alcohol come from culture and individual differences. There are violent drunks, depressive drunks, sleepy drunks, amorous drunks and all the rest.

Culture and social norms also pitch in with their own influences. We have certain expectations about how alcohol will shift us into parallel states of consciousness and, hey presto, so it does. One study gave participants a fizzy drink and told them it contained vodka (Assefi & Garry, 2003). They were soon acting drunk, complete with inflated egos, despite having had nothing more toxic than tonic water. 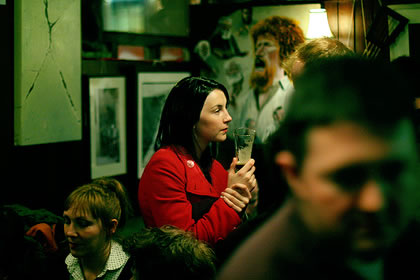 The problem with the expectations explanation is that we’re not reliably shifted into the same parallel state of consciousness. If culture and personality mostly explained the psychological effects of alcohol, then how come we can have quite different experiences while drinking?

So clearly alcohol’s effects must depend on the exact situation in which we drink. But which features of a situation nudge our feelings and behaviour in one or other direction, one time towards depressive introspection, say, and another time towards joyous extraversion?

According to a growing body of evidence collected over the last three or more decades, people’s Jekyll and Hyde behaviour while drinking can be understood by a simple idea which has some intriguing ramifications.

The alcohol myopia model says that drink makes our attentional system short-sighted and the more we drink, the more short-sighted it becomes. With more alcohol our brains become less and less able to process peripheral cues and more focused on what is right in front of us. It’s this balance between what is right in front of us and what we don’t notice around the edges that determines how alcohol affects us in different situations.

Here are a few effects which imbibers will recognise immediately:

The fact that the effect of alcohol on the human mind is more than just disinhibition is supported by studies showing how, when environmental cues are manipulated, alcohol can have counter-intuitive effect. Here are three neat studies:

So the effects of alcohol come down to how our minds interact with the situation when our attentional systems have started operating with a kind of tunnel vision.

This model doesn’t explain everything and it would be wrong to say that psychologists agree that it does. But what the alcohol myopia model does provide is a very intuitive and easily understood way of thinking about how alcohol affects us, for better and worse.

The next time you have a drink, see what you think: does your attention narrow to what’s right in front of you? One of the reasons so many people enjoy its effects when socialising is that it allows us to live in the moment, without distraction, focusing purely on the conversation we’re having together, freed from our own negative self-evaluations and the intrusive minutiae of everyday life.

While alcohol may well cause disinhibition under certain circumstances, there is more going on than just that. Attentional tunnel vision provides a useful way of thinking about the many and varied effects of the demon drink.