Online Snooping: Is Your Partner Secretly Watching You? 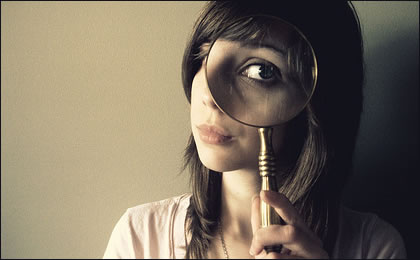 In 44% of married couples, at least one partner is secretly checking up on the other’s online activities.

Flirting. Sharing relationship secrets with members of the opposite sex online. Pornography.

What do married couples consider unacceptable uses of the internet? Do they check up on each other? If so, how?

To find out Helsper and Whitty (2010) recruited a representative sample of 992 British couples and asked them what is acceptable and whether they snoop on each other.

Unacceptable behaviours were all the usual culprits. People were unhappy if:

Husbands and wives didn’t always agree, with wives generally more unhappy about all these behaviours than husbands. In fact women were more likely to think that both their own and/or their partner’s internet use was problematic.

Less controversial were entertainment behaviours like shopping, viewing adult material and playing games, on which partners were more likely to agree with each other.

So, do partners spy on their other halves?

When partners snooped on each other, men and women were about equal, but when only one partner snooped on the other, it was more likely to be the woman snooping on the man.

Here are the three most common ways everyone reported snooping:

Are you being watched?

Chances are that if you snoop on your partner, then they are snooping on you (monitoring behaviour was similar for 73% of couples in the current sample). Women were, though, more likely than men to snoop on their partners. This may be because of greater worries about infidelity, ‘internet addiction’ (see Mind Hacks) or pornography. Or more simply because, on average, women worry more than men.

Bear in mind that all these figures may well be underestimates since people are likely to be reluctant to admit spying on their partners as it suggests a lack of trust. In fact I’m surprised this many people admitted it. Real world numbers could be higher.