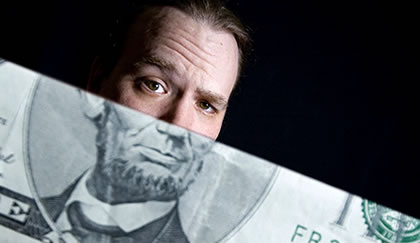 Studies show that people inhabit two separate worlds – the social and the financial – and depending on which one is activated, their thoughts and behaviour can change dramatically.

I received a rude awakening about the separation between financial and social worlds a few years ago when I moved flat. A friend agreed to help me move all my stuff across town in the back of a van I’d hired. It took much longer than I’d expected – we were still unloading at midnight – and we were both exhausted by the end.

This wasn’t what I’d intended at all – I had grossly misread the situation.We never discussed money beforehand but, after a long day’s work, I thought it only fair I give the guy some cash for his efforts. Not only that, it had taken so long I wanted to use the money as a way of apologising. Strangely, though, he seemed unimpressed with it, even though I thought I’d been quite generous. It was obvious I’d really offended him but it wasn’t until later that I realised what had been going on.

He had been operating in the social world – he thought he’d been helping me out as a friend. My paying him for his time signalled that I didn’t see our relationship as primarily operating in social terms, but rather in financial, market-based terms. This wasn’t what I’d intended at all – I had grossly misread the situation.

This chasm between our social and financial worlds has been explored in two recent studies that uncover fascinating ways in which money affects our thoughts and behaviour. In the first, participants were subjected to one of social scientists’ favourite ruses: the apparently pointless task. They were simply asked to drag a circle across a computer screen as many times as they could in five minutes (Heyman & Ariely, 2004).

The experiment compared three different groups in which the payment for this mind-numbing task was as follows:

Professors Heyman and Ariely argue that people have a mental split between their social and financial worlds.When the researchers looked at how many circles each group, on average, had dragged across the screen, sure enough money was a motivator. Those paid $5 averaged 159 circles into the box, while those paid 50 cents only dragged 101 circles. So far, so obvious. But the interesting result comes with those who were asked to participate ‘as a favour’. This group dragged an average of 168 circles into the box. That means the group asked to participate as a favour did about the same amount of ‘work’ as those paid $5. Why?

Professors Heyman and Ariely argue that people have a mental split between their social and financial worlds. Different rules apply depending on whether people are trading in hard currency, contracts and delivery dates; or, alternatively, in friendships, trust or other social connections.

When the value of a gift doesn’t matter

To see how different the rules are in the two worlds, have a look at a second experiment carried out by Heyman and Ariely (2004). Again this involved the circle dragging task, but this time the experimenters wanted to look at the effects of different types of gifts on how hard people would work.

With gifts we move from the financial world back to the social world. The question is: do people work harder if the gift is bigger? In this experiment there were three conditions where participants were given:

This time there was no statistical difference between the groups – each dragged about the same number of circles: all three groups averages were in the 160s. This shows that in the social world, thank-you gifts don’t need to be commensurate with the task performed. Whereas in the financial world, you only get what you pay for.

Just flipping from a ‘payment’ of 50 cents to a ‘gift’ of a snickers bar is enough to start people thinking socially, rather than financially. As a result people were more motivated by a gift of worth 50 cents than they were by 50 cents in cash.

It’s not just in motivation to perform tasks that money has important effects, it’s also in how we behave socially. In the second study, Professor Kathleen Vohs from the University of Minnesota and colleagues wanted to see how people’s behaviour changed when they were subliminally primed to think about money (Vohs, Mead & Goode, 2006).

Professor Vohs and colleagues actually carried out seven separate experiments but they all followed the same pattern. First participants were unconsciously prompted to think about money in some way, then some aspect of their behaviour was measured.

These results were repeated in the six other scenarios, where people reminded about money, compared to others, were more likely to:

This study shows how easily people move from thinking socially to thinking financially with the result that they focus mainly on themselves and their own needs. The effects of even these subtle unconscious reminders about money are enough to change people’s behaviour quite drastically.

In just the same way, economics students – who presumably spend a lot of time thinking about money – have been shown to act more selfishly than students of other disciplines (Frank et al., 1993). It doesn’t take much of a mental leap to conclude that people who work in jobs which continually remind them about money will, on average, be more self-focussed than others.

So, whether we realise it or not, we simultaneously inhabit two completely different worlds. In the social world we are more likely to help people out just because they ask and because it makes us feel good. In the financial world, however, it’s all a matter of contracts, payments and let the ‘buyer beware’ – in this world you only get what you pay for, and sometimes not even that.

Being aware of when, and if, we’re moving between these two worlds can help us negotiate each more easily. Certainly I now realise that when I moved flat I would have been much better off giving my friend a gift, rather than money. Because sometimes money just pushes all the wrong buttons.