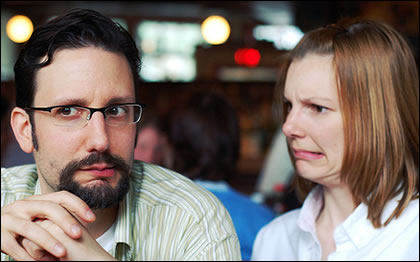 Although cognitive dissonance is a powerful, well-known predictor of human thought and behaviour, its limits are less well understood.

People often display a striking ability to change both their behaviour and their view of the world to try and make it self-consistent. For example, people will interpret seemingly inconsistent information to support their own view of the world and they will adjust their attitudes to make it consistent with their behaviour. One example is that people often value a club or society more if it is harder to get into, even if it turns out to be rubbish.

Psychologists have labelled the cause of this drive towards self-consistency ‘cognitive dissonance’. In the classic experiment on cognitive dissonance conducted in the late 1950s experimenters discovered that people will work extraordinarily hard to present a consistent front to the world.

Perhaps because of the bewildering contrariness people sometimes display, it has become one of the most heavily researched concepts in social psychology. But since the original discovery of cognitive dissonance researchers have probed its boundaries. A frequent worry has been to explain why, if the theory is correct, we are not more consistent. After all, people will frequently display major inconsistencies in their thoughts and behaviour without appearing to suffer any crippling cognitive dissonance.

People will happily explain their reasons for buying a particular dress, choosing a Mexican restaurant for their birthday party or moving lock and stock to Spain. Then, two weeks later, they will cheerfully tell you the exact opposite without any obvious compunction. Surely cognitive dissonance shouldn’t allow this?

One explanation for this apparent breach of cognitive dissonance lies in an experiment conducted by Cooper and Worchel (1970). The setup for this experiment was a variation on that carried out by Festinger and Carlsmith (1959). Essentially participants in that experiment were asked to dupe another person who is in on the experiment (a confederate) into thinking a particular task they are about to do is really interesting. In fact it was very boring.

Strangely, as cognitive dissonance predicts, people changed their own attitudes to the task when they were only paid a nominal fee for the experiment, but didn’t when they were handsomely rewarded. It seems people are looking for a reason to lie – if money isn’t the reason then it must be because the task is interesting (although it clearly isn’t), so they change their attitude to be consistent with their behaviour: “I didn’t lie, the task was actually interesting.”

In Cooper and Worchel’s (1970) study, though, another variation was introduced. When the participant explains to the confederate that the task is really interesting, the confederate has been told to react in one of two ways. In the first condition they act convinced by what the participant has told them; in the other condition they appear unconvinced.

This is designed to test the idea that cognitive dissonance only operates when people think their inconsistent behaviour has had some bad consequence that they would rather avoid. In this case it’s the nasty feeling in one condition that the participant has lied to someone, and they believed it.

It’s not just consequences that we’d rather avoid that activates cognitive dissonance, though, these consequences must also be foreseeable. This is demonstrated in a study by Goethals, Cooper and Naficy (1979) in which participants were asked to write an essay which was designed to be in direct opposition to their own attitudes towards an on-campus policy. Participants were split into three groups:

After the experiment all the participants were told their essays would be forwarded to the university committee. True to form participants in both groups 2 and 3 later changed their attitude towards the on-campus policy.

Participants in group 1, however, who had no way of knowing their essays would be forwarded to the relevant authorities, maintained the same attitude towards the policy. It seemed that cognitive dissonance did not operate when the bad consequences were unforeseeable.

These limits on cognitive dissonance, that consequences must be both aversive and foreseeable, make the theory considerably more realistic. It helps to explain why people in many situations are happy to change their behaviours or attitudes in an inconsistent manner. In everyday life we are happy to admit to our own inconsistencies right up until the point where it actually matters, and we can see it’s going to matter.