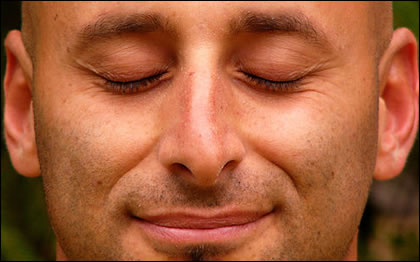 The psychological literature clearly shows there is a strong relationship between success and happiness. For example, people who have a comfortable income, or high status in society are usually happiest. But which one comes first, happiness or success?

There’s almost an unwritten assumption that it is primarily success that leads to happiness. This is tacitly backed up by psychological research which tends to talk about how success affects happiness.

Of course it’s not an either/or situation. The two are probably interrelated in all sorts of complicated ways. But to only talk about how success leads to happiness is ignoring half the story. So says psychologist Professor Sonja Lyubomirsky and colleagues who have pointed out there is plenty of evidence that happiness can, in fact, lead to success (Lyubomirsky, King & Diener, 2005).

The best evidence that happiness causes success comes from experimental studies. These usually work by inducing participants into positive and negative moods and then comparing their behaviour in particular situations like social interactions or health behaviours.

These studies have produced a raft of fascinating results, finding that people in a positive mood are more likely to:

The strength of this evidence is that it is based on experimental studies with control groups which provide some of the most persuasive data in science. On the other hand it’s important to note that positive affect isn’t the only factor that’s involved in success – there are plenty others. Still, this is an impressive list.

How we think about happiness and success has profound implications for how we run our lives. If we think that success mainly leads to happiness then we are more motivated to focus on success to the exclusion of happiness right now, assuming that happiness will naturally flow from success when we obtain it.

If the psychological research is right, though, the strategy would still be to pursue success, but not, crucially, to the exclusion of happiness. Feeling better in the moment is not only more pleasant but is also likely to open our minds to opportunities at work, play and in our personal relationships. It’s recognising and taking these opportunities that will lead us to success.