Are We Programmed to Laugh When Tickled? 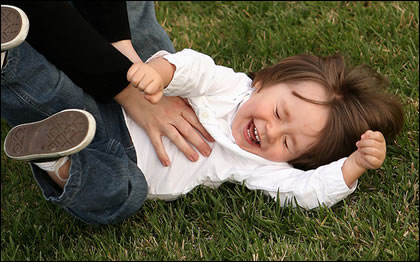 Do we learn to laugh when tickled or is it an innate response? That is the question psychologist Professor Clarence Leuba set himself to examine using his own children, no less, as experimental subjects.

In 1933 he decided that he would not laugh in the presence of his first child while tickling him (Leuba, 1941). Everyday life in the Leuba household, therefore, was devoid of tickling except for one special experimental period. During this period he would cover his own face with a mask while tickling his son so his facial expression was hidden.

Even the tickling was experimentally controlled. First he would tickle lightly, then more vigorously. First under the armpit, then the ribs, followed by chin, neck, knees and feet.

Reportedly all went well until late April 1933 when his wife suddenly forgot all the protocols. After her son’s bath she accidentally administered a short bout of bouncing up and down on her knee with laughter while using the words: “Bouncy, bouncy”!

Was the experiment ruined? Leuba wasn’t sure. But after seven months, with only one bout of laughter associated with tickling the results were in. His son happily laughed away when tickled. It appeared that laughing when tickled is an innate response.

Leuba wasn’t satisfied with this, though, and set about carrying out the same test on his next child, a girl. This time the same experimental procedure was administered and Mrs Leuba’s “Bouncy, bouncy” tendencies were apparently kept at bay for seven months. At the end Leuba got the same results – his daughter began to spontaneously laugh when tickled despite never having been shown how.

But it wasn’t all experimental procedures and faces hidden behind masks in the Leuba household, indeed Professor Leuba must have become an expert tickler.

He found the best way to make his children laugh was to tickle them along the ribs and under the arms. The element of surprise was also important in producing maximum giggling response. He observed that his children would control the level of tickling by holding his finger, but would then demand more tickling.

Who says science isn’t a laugh?