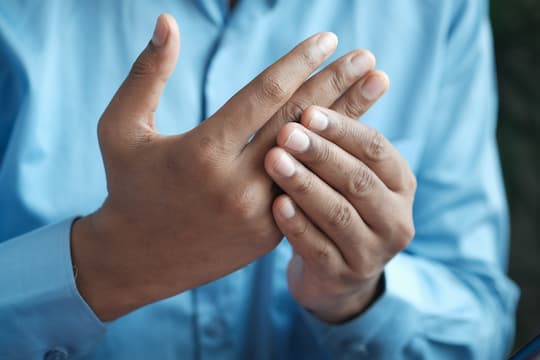 Statins may reduce the risk of a heart attack by as much as one-third.

Statins are cholesterol-busting drugs that are designed to reduce the risk of heart disease and stroke.

However, some people naturally worry about the side-effects these drugs may have, despite the fact that they are one of the most commonly prescribed drugs.

Statins may reduce the risk of a heart attack by as much as one-third.

Still, many refuse to take them because around 20 percent of people report side-effects.

Some of the most common side-effects are fatigue, muscle aches and joint pain.

In addition, some people taking the cholesterol medication report pins and needles in their hands and feet.

However, research suggests that some of these people may be experiencing the ‘nocebo’ effect.

The nocebo effect is when a person experiences side-effects due to the negative associations the drug has rather than because of its pharmaceutical effect.

One study has found that 90 percent of symptoms reported were from patients who were taking a placebo.

In other words, many people, despite taking a pill with no medicine in it, are still getting side-effects.

“Statins are life-saving treatments that can help prevent the risk of heart attacks, strokes and cardiovascular disease.

Previous studies have shown that statins are safe and effective at preventing serious health conditions but some patients stop taking or refuse the drug due to reported side effects, potentially increasing their risk of heart attack and stroke in the long-term.

Our study suggests that the reported side effects of statins are not caused by the statin themselves but by the effect of taking a tablet.

Some of the side effects could also be from the typical aches and pains of getting older.

Our findings are significant because they are further evidence that side effects from statins are minimal.

These drugs play a significant role in keeping patients who are at risk of cardiovascular disease healthy.

One way to help encourage patients to take or stay on their medication is for doctors to talk to their patients about the nocebo effect.

In more severe cases patients could be referred for talking therapies.”

The study was published in the New England Journal of Medicine (Wood et al., 2020).