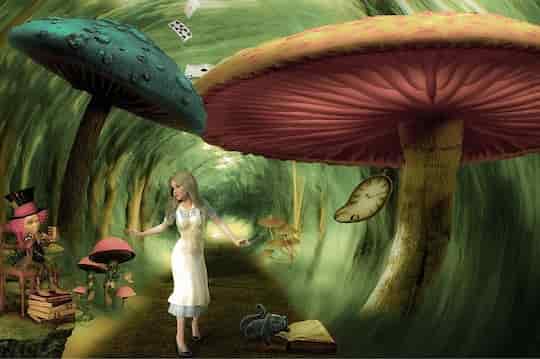 Delusions come in all shapes and sizes; from transient episodes to full-blown and incurable mental illnesses.

But they all have one thing in common: being detached from reality.

Delusions do not listen to reason and they do not bow to facts.

Here are thirteen of the strangest delusional beliefs…

Named after the novel by Lewis Carroll, this delusion affects perceptions of both space and time.

They may also find it difficult to judge time.

A relatively common delusion, not necessarily associated with mental illness, people sometimes report experiencing this as children or even just before falling asleep.

Often, though, the delusion is caused by migraines, which Lewis Carroll suffered from and may have used as inspiration for the story.

Also known as ‘Walking Corpse Syndrome’, Cotard’s syndrome or Cotard’s delusion is when the sufferer believes he or she is dead, does not exist or has lost their internal organs.

Typically those suffering from Cotard’s will deny they exist; naturally, this means they find it very difficult to make sense of reality.

People with Cotard’s syndrome become very withdrawn from others and tend not to look after themselves properly.

The delusion is often found amongst people suffering from schizophrenia.

Capgras syndrome or delusion is thought to be neurologically similar to Cotard’s.

The Capgras delusion is the belief that a person who is close to the sufferer has been replaced by an imposter who appears identical, but isn’t the same person.

The delusion is named after French physician Joseph Capgras who first described it.

Capgras is often associated with schizophrenia but the delusion may also result from brain damage and dementia.

So much better than the technical name of ‘shared psychotic disorder’.

It’s when two (or more) people who (usually) live in close proximity come to share the same delusion(s).

Thought insertion is the delusion that the sufferer’s thoughts are not their own.

The delusion of thought insertion is often a symptom of schizophrenia.

Paris syndrome is a transient experience that affects tourists to Paris who find that the City of Light does not live up to their expectations.

They may experience hallucinations, delusions of persecution, anxiety and other somatic symptoms.

Paris syndrome may sound like a joke, but around twenty Japanese tourists a year are thought to be hospitalised with it.

Some think it is brought on by culture shock, as the Japanese have a particularly idealised view of Paris.

The usual treatment for Paris syndrome is to go home.

Paris does not have the monopoly on causing visitors to be struck down by mental illness.

Some visitors to Jerusalem can become obsessed with the city after arriving.

Those experiencing the syndrome may suffer from anxiety, start wearing a toga, begin singing hymns or shouting out verses from the Bible.

Some even begin giving poorly practised sermons in public.

Estimates place the number of people who require hospital admission from this syndrome at around 40 per year.

As for Paris syndrome, the normal treatment is to go home.

This is the belief that the sufferer’s partner is cheating on them, despite there being no evidence whatsoever.

They may continuously check up on their partner, stalk them, interrogate them about where they’ve been and, in extreme cases, it can lead to violence.

Ekbom’s syndrome is the stuff of nightmares.

In this particularly nasty form of hypochondria, the sufferer thinks their body has been infested by parasites.

It is not uncommon for sufferers to contact pest control specialists or dermatologists rather than psychologists or psychiatrists.

It is named after Swedish neurologist Karl Axel Ekbom, who wrote about it in the 1930s.

Clinical lycanthropy is the belief that the person has, or is in the process of, turning into an animal.

The condition is very rare.

This condition is usually caused by brain damage and results in the person believing a place or location has been duplicated and/or moved somewhere else.

Soldiers with head injuries have been reported to believe that the hospital in which they are recuperating is actually in their home town, when in fact it is nowhere near.

It shares some features with Cotard’s syndrome and Capgras syndrome in that people, places or things have been replaced or are somehow transformed.

This is where someone genuinely believes that they have a doppelgänger who looks like them, but has a different personality and a different life.

Sometimes the doppelgänger can be a stranger, sometimes it can be a family member.

In some cases sufferers can become enraged by someone they perceive has having stolen their appearance, and this can lead to psychological or physical attacks.

The syndrome is most commonly seen in people with bipolar disorder or schizophrenia, although it is very rare.

Not quite as exciting as it sounds, erotomania, also known as de Clérambault’s Syndrome, is named after a French physician.

Erotomania is a delusion in which the sufferer is convinced that another person is in love with them.

Typically, the object of an erotomania delusion is unobtainable because they are married, disinterested or in some cases almost unknown to the sufferer or even dead.

Erotomania occurs more in women, who may believe they have several ‘secret admirers’ who send them coded messages which are so subtle as to be obviously random — such as, crossing their legs a certain way.

Erotomania is sometimes caused by or accompanies another serious mental health problems, such as schizophrenia or bipolar disorder.

Many of these mental delusions seem so far fetched that it can be difficult to understand how people can continue to believe them — especially when they are repeatedly assured of the ‘truth’.

One reason people find it difficult to break free of mental delusions or hallucinations is down to faulty ‘reality testing’, one psychologist argues (Gerrans, 2014).

This is caused by a fault in part of the brain that normally checks strange ideas against reality.

“Normally this ‘reality testing’ in the brain monitors a ‘story telling’ system which generates a narrative of people’s experience.

A simple example of normal reality testing is the person who gets a headache, immediately thinks they might have a brain tumor, then dismisses that thought and moves on.

Their story episode ‘I might have brain cancer’ gets tested and quickly rejected.

In someone who has problems with reality testing, that story might persist and may even be elaborated and translated into action.

Such people can experience immense mental health difficulties, even to the point of becoming a threat to themselves or to others.”

Professor Gerrans describes one man who had a serious head injury and developed Capgras syndrome:

“His family looked familiar but didn’t feel familiar, and the story in his head made sense of that feeling.

It didn’t matter how much people tried to point out that his family was the same, in his mind they had been completely replaced by impostors.”

A familiar point at which we often reject a delusion is when experiencing déjà vu, said Professor Gerrans:

However, such feelings do not lead to delusion in people whose reality testing is intact.”

Understanding the reality testing system in the brain could help to treat people experiencing delusions and hallucinations:

“Trying to treat someone experiencing these delusions by telling them the truth is not necessarily going to help, so new strategies need to be developed to assist them.

Ultimately, that’s the aim of this work — to help explain the nature of reality testing in order to help people find a way of working through or around their delusions so that the delusions no longer adversely affect their lives.”