Arachnophobia: How To Overcome A Fear Of Spiders 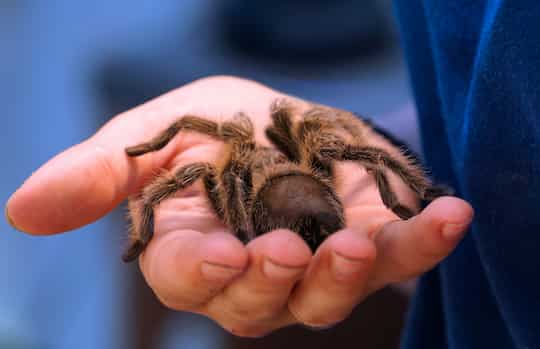 Arachnophobia, or the fear of spiders, makes them seem much more threatening than they are, however it can be cured relatively quickly.

Arachnophobia, the name for the fear of spiders, is one of the most common phobias, and largely irrational given that we are much more likely to kill them than they are to kill us.

People with severe arachnophobia are so scared of spiders they can’t even bear to look at a picture of one.

Arachnophobia is relatively common, with up to 50 percent of women and 18 percent of men being arachnophobes.

The arachnophobia rates vary from study to study — the exact figure probably depends on whether you draw the line at people who are absolutely terrified of them or at people who find them somewhat creepy.

Below is the psychological research on the roots of arachnophobia, what it does to the mind and how it can be quickly cured.

1. Arachnophobia may have ancient roots

It may be no accident that so many people have arachnophobia, or a fear of spiders.

One prominent theory of arachnophobia states that early on in human evolution, spiders posed a threat, so we’ve developed a sort of hair-trigger reaction to them.

You can see this in children as young as three.

When they are shown pictures of either spiders or cockroaches, the children are much quicker to spot the spiders (LoBue, 2010).

This is unusual since cockroaches are also unattractive creepy-crawlies.

Not everyone agrees with this evolutionary theory about arachnophobia, though, and some argue that we actually learn arachnophobia at a young age.

However much the fear is learned, there does seem to be an innate component: we can all learn to be afraid of spiders very, very quickly.

“OHMYGOD, there’s a MASSIVE one in the bath!”

Except to other people it doesn’t look that big.

For those with arachnophobia, the fear of spiders actually causes the spider to appear larger than it really is.

In one study, people with arachnophobia were asked to look at various sized tarantulas, then estimate their size (Vasey et al., 2012).

The more scared of spiders they were, the more they overestimated its size.

Similarly, people with arachnophobia perceive them as closer, if they come towards them.

One study had participants watching a video of spiders coming towards them.

The more scared they were of spiders, the more they underestimated this distance.

“The more fearful someone reported feeling of spiders, for example, the more they underestimated time-to-collision for a looming spider.

Unlike, say, a bull, though; a spider is unlikely to charge at you.

4. How to cure arachnophobia

It’s possible to be cured of arachnophobia in one brief session.

Six months after a single session of therapy for arachnophobia, twelve people who were too scared to even look at a picture of a spider, could still hold a tarantula in their hands (Hauner et al., 2012).

The arachnophobia therapy itself involved slowly being exposed to a tarantula and having some mistaken thoughts corrected.

“They thought the tarantula might be capable of jumping out of the cage and on to them.

Some thought the tarantula was capable of planning something evil to purposefully hurt them.

I would teach them the tarantula is fragile and more interested in trying to hide herself.”

The usual treatment for phobias is slowly exposing people to their fears until they get used to them.

This is done in a graded way, starting with photos and moving on to live ones.

For those looking for a home cure for arachnophobia, here are three quick tips:

Imagining spiders can also help people get over arachnophobia.

Repeatedly imagining something you are afraid of can set you free from it (Reddan et al., 2018).

The process of imagining an anxiety or fear leads to what psychologists call ‘extinction learning’ from arachnophobia.

Extinction learning means getting used to something you are exposed to repeatedly.

This study, though, found that imagining the threat, like a spider, is just as effective as being exposed to it in reality.

7. A faster treatment for arachnophobia

More advanced methods have been discovered for curing arachnophobia faster.

For examples, when people are exposed to their fears in time with their heart beats, the treatment works even better (Watson et al., 2018).

“Many of us have phobias of one kind or another — it could be spiders, or clowns or even types of food.

Treatment usually involves exposing the person to their fear, but this can take a long time.

Our work shows that how we respond to our fears can depend on whether we see them at the time our heart beats, or between heartbeats.

You could say we’re within a heartbeat of helping people beat their phobias.”

For the study, 53 people with a fear of spiders were shown pictures of them on a computer screen.

Some were shown the pictures in time with their heart beat, others when the heart was resting and a third group randomly.

The results showed that spiders flashed up when the heart was beating led to the greatest reduction in fear of spiders.