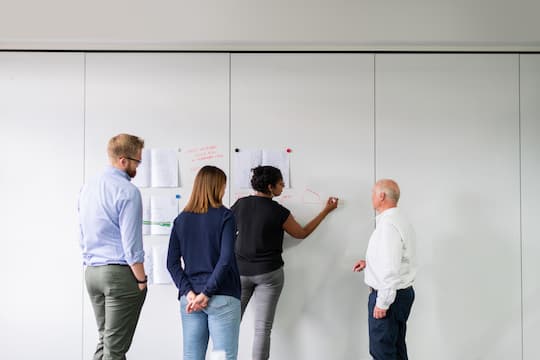 Group polarization is the finding in psychology that group decisions tend towards the extreme rather than averaging out the preferences of participants.

Group polarization is the trend to extreme decision-making in groups.

To explain: say you put 10 people in a room and asked them to design a car.

Would they design something average or something wacky?

Would they be more likely to come up with the Ford Focus or ‘The Homer’, designed by Homer Simpson in this classic episode of The Simpsons?

To help you decide, it’s handy to know that ‘The Homer’ has a number of forward-thinking design features including three horns, all of which play “La Cucaracha”, optional restraints and muzzles for the children and an engine noise that will make people think “the world is coming to an end”.

We tend to think that group decisions average out the preferences of participants so they would come up with something closer to the Ford Focus.

But the psychological research doesn’t support this conclusion.

In fact group discussions tend to polarize groups so that, rather than people’s views always being averaged, their initial preferences can become exaggerated and their final position is often more extreme than it was initially.

In an early set of studies on group polarization all about risk, decision-making was shown to shift either towards the cautious or the risky depending on the type of problem (Stoner, 1968).

Since then hundreds of studies from around the world have shown the phenomenon of group polarization in action.

For example, after a group discussion, people already supportive of a war become more supportive, people with an initial tendency towards racism become more racist and a group with a slight preference for one job candidate will come out with a much stronger preference.

Naturally this shift towards the extreme seen in group polarization has all sorts of implications for government, religion, commerce and the justice system.

In fact one of the neatest pieces of real-world group polarization research examines the US legal system.

Main and Walker (1973) analysed the decisions of Federal district court judges sitting either alone or in groups of three to see if group discussions were a factor.

In the 1,500 cases where judges sat alone they took an extreme course of action only 30% of the time.

However when sitting in a group of 3 this figure more than doubled to 65%.

It seems even trained, professional decision-makers are subject to the forces of group polarization.

Psychologists have three main theories for why group polarization occurs — persuasion, comparison and differentiation — but all of them have much the same cause.

In any group trying to make a decision there is likely to be an initial preference in one particular direction.

Those who don’t initially agree with that decision are likely to change their mind to agree with the majority.

The processes involved, though, are different:

As you can see these are all slightly different mechanisms involved in group polarization, each which probably operates independently, for producing much the same effect: decisions are pushed further towards the extreme.

It’s worth pointing out that not all groups do polarize in this way and, indeed, a few of the studies have not observed the polarizing effect of groups on decision-making.

Well-established groups probably suffer less from group polarization, as do groups discussing problems that are well-known to them.

That said, though, where groups are relatively newly formed and tasks are novel, group polarization can emerge as an important factor in decision-making.

Psychologists have been less keen to offer ‘solutions’ to group polarization than they have other phenomena in group decision-making such as groupthink or the failure of groups to share information.

However, because groupthink has similar causes to group polarization, much the same approach can be used.

This is all about nurturing dissent in a group by encouraging the discussion of multiple perspectives and critical viewpoints.

Indeed research conducted by Fishkin and Luskin (1999) has shown that diverse groups do not polarize.