Negotiation: 2 Psychological Strategies That Matter Most 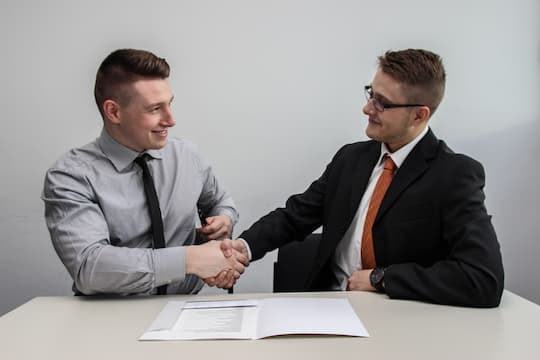 Negotiation has two major pitfalls: when people do not communicate with each other and when they start using threats.

Negotiation is one of those activities we often engage in without quite realising it.

Negotiation doesn’t just happen in the boardroom, or when we ask our boss for a raise or down at the market, it happens every time we want to reach an agreement with someone.

This agreement could be as simple as choosing a restaurant with a friend, or deciding which TV channel to watch.

At the other end of the scale, negotiation or bargaining can affect the fate of nations.

Big-scale or small-scale, negotiation is a central part of our lives.

Understanding the psychological processes involved in negotiation can provide us with huge benefits in our everyday lives.

In a classic, award-winning series of studies, Morgan Deutsch and Robert Krauss investigated two central factors in negotiation: how we communicate with each other and how we use threats (Deutsch & Krauss, 1962).

To do this, they used a game which forces two people to negotiate with each other.

Although Deutsch and Krauss used a series of different conditions – nine in fact – once you understand the basic game, all the conditions are only slight variations.

So, imagine you were a clerical worker at the Bell Telephone Laboratories in the late 1950s and you’ve been asked to take part in a psychology study.

Every psychology study has a story, and this one revolves around two trucking companies…

Before the experiment proper starts, the researcher explains that you’ll be playing a game against another participant.

In the game you will run a trucking company.

The object of the game is the same as a real trucking company: to make as much money as possible.

Like the real-life trucking company you have to deliver as many of your goods as possible to their destination in the shortest possible time.

But in this game you only have one starting point, one destination and one competitor.

The road map your one truck has to travel across presents you with a dilemma.

Have a look below. 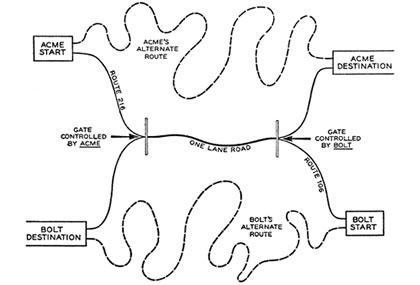 As you’ll see there are two possible routes you can take from the start to your destination: the short and the long.

Remember, time is money, so the longer it takes you to get to your destination, the less profit you make, which is the aim of the game.

Unfortunately the short route has a major shortcoming: it is one-way.

Only one of you can travel down it at a time towards your destination.

It seems you’ll be forced to work out some agreement through negotiation with your unknown rival to share this one-way route so that you can both make money.

How you’ll do this is another mystery, though, as there is going to be no communication between the two of you during the experiment.

You are to be seated in a cubicle from where you’ll only be able to see the control box for your ‘truck’ and the experimenter.

Each of you controls a gate at your own end of the one-way road.

Your gate can be opened or closed whenever you pass through it.

This will be your threat.

It is reinforced by the experimenter that you are out to make as much money as you can for yourself – the other person’s profit is not a concern.

Once the experimenter sets you off, it soon becomes clear you’re not going to make much money at all.

In the first of 20 trials, both you and your rival shut your gates, forcing both trucks onto the alternative route.

This is 50% longer and means you make a loss on the trip as a whole.

In the second trial your trucks meet head-on travelling up the one-way road.

You both have to reverse, costing you time and money.

The rest of the trials aren’t much better.

Occasionally you make a profit on a trip but more often than not it’s a bust.

You spend more time on the long route or reversing than you do chugging happily along the main route making money.

At the end of the experiment, the researcher announces how much profit you made.

In fact you made a crippling loss.

You find out later that you were in one of three experimental conditions.

The only differences in the other two conditions were that in one there were no gates at either end of the one-way road.

In the other there was only one active gate controlled by one player.

Before I tell you the results of the other two conditions, try to guess.

One condition, which you’ve taken part in, contained bilateral threat – you could both threaten each other.

One condition had unilateral threat – only one could threaten the other.

And the final condition had no threat at all.

What was the order of profit?

In fact it turns out that your condition, of bilateral threat, made the least profit when both participant’s scores were added up.

Here’s the first rather curious result.

While the person who had the threat – control of the gate – in the unilateral condition did better than the person who didn’t, they were still better off, individually and collectively, than if they both had threats.

What this experiment is showing is that the availability of threats leads to worse outcomes to the extent that unilateral threat is preferable to bilateral threat to both parties.

But surely a little communication goes a long way?

You weren’t allowed to talk to the other participant in this experiment, so your trucks had to do the talking for you.

Bargaining is all about reaching a compromise through negotiation – surely this should help?

To test the effect of communication Deutsch and Krauss (1962) set up a second experiment which was identical in all respects to the first except participants were given headphones to talk to each other.

Here’s the next curious result: allowing the two participants to communicate with each other made no significant difference to the amount of money each trucking company made.

In fact the experimenters found no relationship between words spoken and money made.

In other words, those who communicated more did not manage to reach a better understanding with each other.

They did little negotiation.

Like the experimenters themselves, I find this result surprising.

Surely allowing people to communicate let’s them work out a way for them both to make money?

And yet this isn’t what happened in the experiment at all.

Instead it seems that people’s competitive orientation was stronger than their motivation to communicate.

On the other hand, perhaps something specific to the situation in this experiment is stopping people talking?

Participants in the second study reported that it was difficult to start talking to the other person, who was effectively a stranger.

As a result they were considerably less talkative than normal.

Could it be that it was this situational constraint that meant little talking, and therefore little bargaining was going on?

Deutsch and Krauss decided to test the effect of forced communication in their third experiment.

Again the procedure is the same as last time but now participants are instructed that on each of the 20 trials they have to say something.

If they don’t talk on one of the trials they are gently reminded by the experimenter to do so.

They are told they can talk about whatever they like, as long as they say something.

The results finally showed some success for communication.

Performance in the one-gate (unilateral threat) condition came close to that achieved in the ‘no-threat’ condition (remember the no-threat condition has the best outcomes).

Forced communication didn’t have much effect on the ‘no-threat’ condition when compared with no communication, and neither did it improve the bilateral threat condition much.

It still seems that people are so competitive when they both have threats it’s very difficult to avoid both sides losing out.

In negotiation, threats cause resentment

The most surprising finding of this study is how badly people do under conditions of bilateral threat.

In this experiment not even forcing communication can overcome people’s competitive streaks.

Deutsch and Krauss provide a fascinating explanation for this.

Imagine your neighbour asks you to water their plants while they’re on holiday.

Socially, it looks good for you if you agree to do it.

On the other hand if they ask you to water their plants otherwise they’ll set their TV on full blast while they’re on holiday, it immediately gets your hackles up.

Suddenly you resent them.

Giving in when there is no threat is seen by other people as pro-social.

Duress, however, seems to make people dig in their heels.

Applying the brakes to negotiation

Before drawing some general conclusions from these studies, we should acknowledge the particular circumstances of this research.

Deutsch and Krauss’s experiment covers a situation in which negotiation is carried out under time pressure.

Recall that the longer participants take to negotiate, the less money they make. In real life, time isn’t always of the essence.

The present game also has a relatively simple solution: participants make the most profit if they share the one-way road. In reality, solutions are rarely that clear-cut.

Finally, our participants were not professional negotiators, they were clerical and supervisory workers without special training.

Despite these problems the trucking game has the advantage of being what game theorists call a non-zero-sum game.

In other words if you win, it doesn’t automatically mean the other person loses.

When you total the final results, as you sometimes can in a financial sense, they don’t add to zero.

In real life many of the situations in which we find ourselves are of this nature.

Cooperation can open the way to more profit, in financial or other form, for both parties.

As a result the trucking game has clear implications for real life:

Remember all these the next time you are bargaining with your partner over a night out, about to shout a threat at a motorist blocking your path on a one-way road, or even involved in high-level political negotiations between warring factions with nuclear capabilities.

It could save you, and the other side, a lot of trouble.