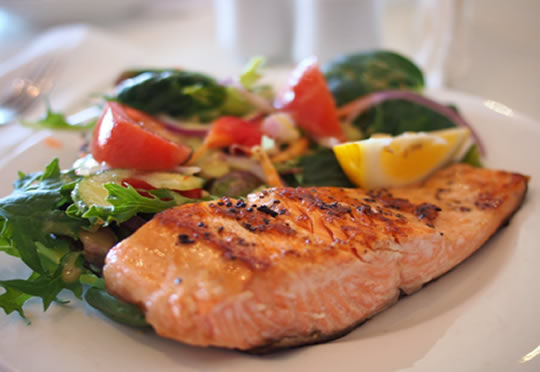 A high omega-3 diet can lower the signs and symptoms of the disease by 50 per cent.

Stiffness in the joints and swelling can be indirect signs of omega-3 deficiency, research suggests.

Waking up stiff in the morning, feeling pain in the joints, swelling, tenderness and loss of flexibility are all signs of arthritis.

Omega-3 deficiency could be contributing, as scientists believe there is a link between this leading cause of disability and a lack of omega-3 in the diet.

Researchers suggest that a diet rich in omega-3 could decrease the symptoms of osteoarthritis.

A study has found that adding fish oil to the diet — and to some degree flaxseed oil (alpha-linolenic acid has an anti-inflammatory effect) — can ease or even prevent osteoarthritis.

With population aging, osteoarthritis will be one of the leading causes of disability.

According to the Centers for Disease Control and Prevention, by 2040 it is estimated that 26% of US adults aged 18 or older will be diagnosed by a doctor with arthritis.

While there are still no effective medications for treating this condition, omega-3 fish oil can be one of the best natural remedies in treating osteoarthritis.

Professor John Tarlton, the lead researcher of the study, explained the effect of omega-3 on osteoarthritis:

“Classic early signs of the condition, such as the degradation of collagen in cartilage and the loss of molecules that give it shock-absorbing properties, were both reduced with omega-3.

Furthermore, there was strong evidence that omega-3 influences the biochemistry of the disease, and therefore not only helps prevent disease, but also slows its progression, potentially controlling established osteoarthritis.”

Modern diets contain up to 30 times more omega-6 than omega-3, whereas our ancestor’s diets contained almost an equal level of these two omega fatty acids.

Therefore, supplementation with omega-3 can help to restore this imbalance in Western diets and improve conditions such as colitis and heart-related diseases.

Fish oil is much more effective than flax seed oil, but for vegetarians and vegans this supplement is an important option.

“Most diets in the developed world are lacking in omega-3, with modern diets having up to 30 times too much omega-6 and too little omega-3.

Taking omega-3 will help redress this imbalance and may positively contribute to a range of other health problems such as heart disease and colitis.”

The study was published in the journal of Osteoarthritis and Cartilage (Knott et al., 2011).