The Simplest Way To Help Someone In Pain 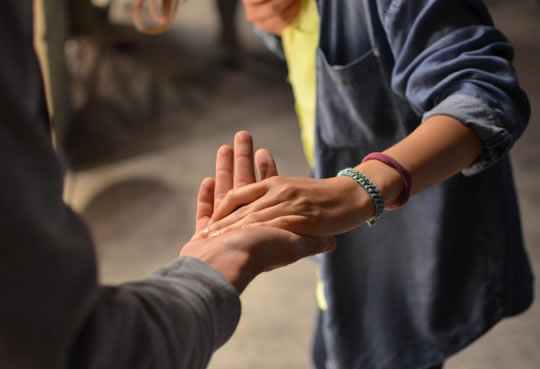 It has incredible psychological and physiological power.

Holding someone’s hand is enough to reduce their pain and even synchronise breathing and heart rates, new research finds.

“The more empathic the partner and the stronger the analgesic effect, the higher the synchronization between the two when they are touching.”

The study is the latest in the area of interpersonal synchronisation.

This is how people’s physiological measures automatically synchronise to those who are around them.

People automatically synchronise their footsteps when walking together and mirror each other’s posture, studies have found.

It has even been shown that when people have a good rapport with each other their brain waves synchronise.

The new study was inspired by Dr Goldstein’s experience with his daughter’s birth:

“My wife was in pain, and all I could think was, ‘What can I do to help her?’ I reached for her hand and it seemed to help.

I wanted to test it out in the lab: Can one really decrease pain with touch, and if so, how?”

Then the woman was subjected to some pain.

The results showed that just sitting together was enough to synchronise the couple’s heart rates and breathing.

However, the pain cut this synchronisation, unless the man was allowed to hold his partner’s hand.

“It appears that pain totally interrupts this interpersonal synchronization between couples.

Touch brings it back.”

It is not yet clear exactly how holding hands is related is related to the pain-killing effect, Dr Goldstein said:

“It could be that touch is a tool for communicating empathy, resulting in an analgesic, or pain-killing, effect.”

The study was published in the journal Scientific Reports (Goldstein et al., 2017).