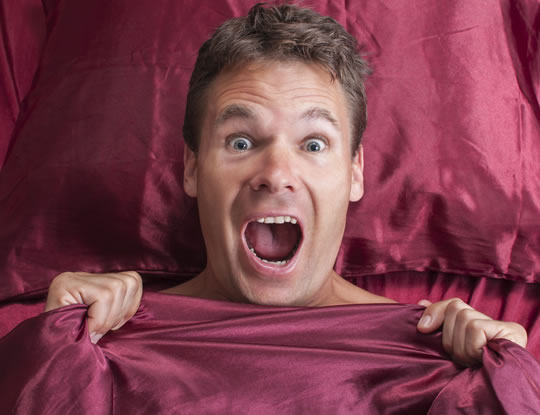 A negative attitude towards the self, insomnia and exhaustion are the three biggest risk factors for frequent nightmares, a new study finds.

The research found that 3.9% of people suffered frequent nightmares.

Dr Nils Sandman of the Centre for Cognitive Neuroscience at the University of Turku in Finland, the study’s first author, said:

“Our study shows a clear connection between well-being and nightmares.

This is most evident in the connection between nightmares and depression, but also apparent in many other analyses involving nightmares and questions measuring life satisfaction and health.”

They completed a health questionnaire and were asked about any nightmares they’d had in the previous 30 days.

Occasional nightmares were reported by over 45% of people, while just over half reported not having had a nightmare in the last 30 days.

Amongst people with severe depression, though, 28.4% had frequent nightmares.

The depressive symptom most closely linked to frequent nightmares was “negative attitudes towards the self”.

Surveys of this nature cannot tell us whether, for example, depression causes nightmares, but the findings are intriguing.

“It might be possible that nightmares could function as early indicators of onset of depression and therefore have previously untapped diagnostic value.

Also, because nightmares, insomnia and depression often appear together, would it be possible to treat all of these problems with an intervention directed solely toward nightmares?”

Plus, I love it that the research was carried out by Dr Sandman.

The Sandman is a creature from European folklore who is supposed to sprinkle sand into people’s eyes as they sleep to give them good dreams.

I’m sure it’s an irony not lost on Dr Sandman himself.