The Age At Which People Are Least Happy With Their Lives 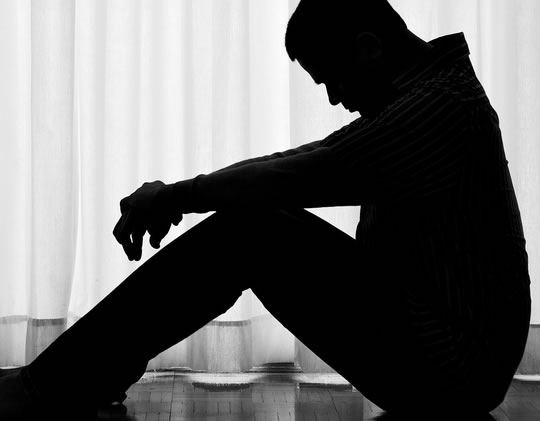 Survey of 160 countries finds the age at which people are the least satisfied with life.

Life satisfaction dips in middle age, after which it starts going up again beyond the age of 54, a new study of worldwide well-being finds.

The dip in life satisfaction occurs around the age of 45 until 54, and is seen across many wealthy English-speaking countries, including the United States, Canada, the UK and Australia.

There were similar findings in these countries for the emotional aspects of happiness.

This was likely because people experienced higher levels of stress, worry and anger in middle age than they did in old age.

Professor Angus Deaton, one of the study’s co-authors, said:

“This finding is almost expected.

This is the period at which wage rates typically peak and is the best time to work and earn the most, even at the expense of present well-being, so as to have increased wealth and well-being later in life.”

Economics is only one of many possible factors.

Western, wealthy countries have better healthcare systems, which are better able to ameliorate some of the problems of ageing.

In the former Soviet Union, for example, life satisfaction declines with age, as it does in Latin American countries.

The only exception was African countries where average life satisfaction remained low throughout the lifespan.

Here are the graphs for how average life satisfaction changes with age for four different areas of the world: 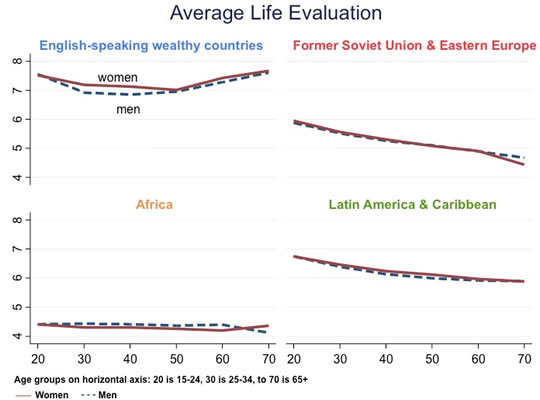 “Economic theory can predict a dip in well-being among the middle age in high-income, English-speaking countries.

What is interesting is that this pattern is not universal.

Other regions, like the former Soviet Union, have been affected by the collapse of communism and other systems.

Such events have affected the elderly who have lost a system that, however imperfect, gave meaning to their lives, and, in some cases, their pensions and health care.”

The data the findings are based on comes from 160 countries which represents over 98% of the world’s population (Steptoe et al., 2014).

When the researchers looked at happiness and mortality, the key to a long life appeared to be a sense of purpose.

When older people feel their life has purpose, their chance of dying was dramatically reduced.

“Even though the results do not unequivocally show that eudemonic well-being is causally linked with mortality, the findings do raise intriguing possibilities about positive well-being being implicated in reduced risk to health.”