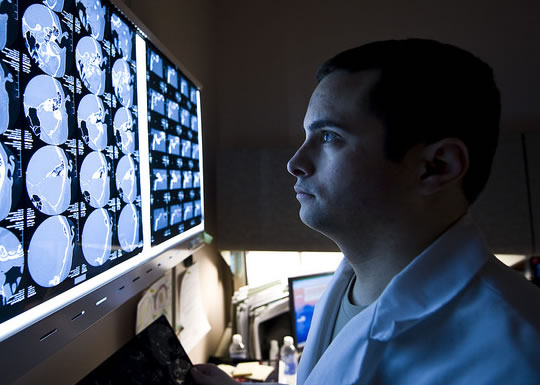 A brain network which links dementia and schizophrenia has been discovered.

A specific brain network which is vulnerable to dementia and schizophrenia has been newly identified.

The study, which is published in the journal Proceedings of the National Academy of Sciences, focused on the structure of the brain’s grey matter, the nerve cells which store and process information (Douaud et al., 2014).

The neuroscientists found that a wide-ranging network in the brain developed late in adolescence and also started to degenerate early with aging.

”Our results show that the same specific parts of the brain not only develop more slowly, but also degenerate faster than other parts.

These complex regions, which combine information coming from various senses, seem to be more vulnerable than the rest of the brain to both schizophrenia and Alzheimer’s, even though these two diseases have different origins and appear at very different, almost opposite, times of life.”

To reach these conclusions, researchers scanned the brains of 484 people who were between 8 and 85-years-old.

They wanted to see how the brain’s structure naturally changes with age.

What they saw was that there is a network of regions in the brain which tend to develop together and which also degenerate together in later life.

The network reaches through many important parts of the brain, connecting areas involved in higher-order thinking.

The findings fit with a theory first put forward in the 1880s about how dementia develops.

The ‘retrogenesis’ theory states that in Alzheimer’s disease, the brain degenerates in the reverse order to how it originally developed.

In the early stages of dementia, a person’s mental faculties can regress to around those of an 11-year-old, then, over the next four or five years, regresses still further back to the level of a 4- or 5-year-old.

“Early doctors called schizophrenia ‘premature dementia’ but until now we had no clear evidence that the same parts of the brain might be associated with two such different diseases.

This large-scale and detailed study provides an important, and previously missing, link between development, ageing and disease processes in the brain.

It raises important issues about possible genetic and environmental factors that may occur in early life and then have lifelong consequences.

The more we can find out about these very difficult disorders, the closer we will come to helping sufferers and their families.”