The 13 Most Universal Phobias

…and seven phobias that should have been on the list but were, strangely, absent.

Heights, snakes and public speaking top the list of things of which people are most afraid.

The results come from a survey of 2,088 British people who were given a list of 13 phobias and asked how fear-inducing each one is (YouGov, 2014).

It was women who were more afraid of each item on the list than men — or perhaps men just won’t admit to their fears.

The widest gender gap was seen for spiders, which scared 52% of women but only 33% of men (or so they said).

Here is the full list of phobias and the percentage of people that said they were “very” or “a little” afraid of them: 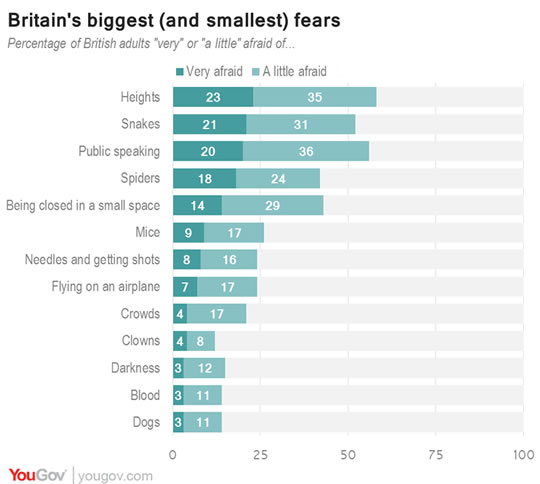 Age also played a role in what people were afraid of.

Older people meanwhile, were more afraid of heights and snakes.

Unsurprisingly there’s no place on the list for one of the most common fears which most people have never heard of: the fear of holes.

Like all the fears on the list, arachnophobia, the fear of spiders, varies a lot between people, with some just being ‘scared’ of spiders to others being so terrified they can’t even look at a picture of one.

Of course people in this survey could only respond to the thirteen phobias they were asked about, they might have had other ones.

Here are a few personal favourites: