Arachnophobia: Why People Are Scared of Spiders 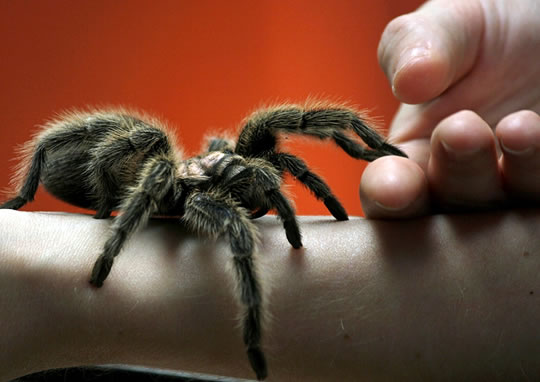 Severe arachnophobes are so scared of spiders they can’t even bear to look at a picture of one–so apologies to them for the picture above.

Fear of spiders is one of the most common phobias, and largely irrational given that we are much more likely to kill them than they are to kill us.

The fact that many people are so frightened of them, though, sends me creeping off to the psychological research to find out more…

It may be no accident that so many people are scared of spiders.

One prominent theory states that early on in human evolution, spiders posed a threat, so we’ve developed a sort of hair-trigger reaction to them.

You can see this in children as young as three. When they are shown pictures of either spiders or cockroaches, the children are much quicker to spot the spiders (LoBue, 2010). This is unusual since cockroaches are also unattractive creepy-crawlies.

Not everyone agrees with this evolutionary theory, though, and some argue that we actually learn our fear of spiders at a young age.

However much the fear is learned, there does seem to be an innate component: we can all learn to be afraid of spiders very, very quickly.

“OHMYGOD, there’s a MASSIVE one in the bath!”

Except to other people it doesn’t look that big.

For the arachnophobe, the fear of spiders actually causes the spider to appear larger than it really is.

In one study, arachnophobes were asked to look at various sized tarantulas, then estimate their size (Vasey et al., 2012). The more scared of spiders they were, the more they overestimated its size.

Similarly, people who are afraid of spiders perceive them as closer, if they come towards them.

One study had participants watching a video of spiders coming towards them. They then estimated the ‘time-to-collision’ (Vagnoni et al., 2012). The more scared they were of spiders, the more they underestimated this distance.

“The more fearful someone reported feeling of spiders, for example, the more they underestimated time-to-collision for a looming spider. That makes adaptive sense: If an object is dangerous, it’s better to swerve a half-second too soon than a half-second too late.”

Unlike, say, a bull, though; a spider is unlikely to charge at you.

It’s possible to be cured of arachnophobia in one brief session.

Six months after a single session of therapy, twelve people who were too scared to even look at a picture of a spider, could still hold a tarantula in their hands (Hauner et al., 2012).

The therapy itself involved slowly being exposed to a tarantula and having some mistaken thoughts corrected.

For those looking for a home cure for arachnophobia, here are three quick tips:

I found some research stating that about 3-7% of people experience arachnophobia. Others gave much higher rates–up to 50% in women and 18% in men. The exact figure probably depends on whether you draw the line at people who are absolutely terrified of them or at people who find them somewhat creepy.