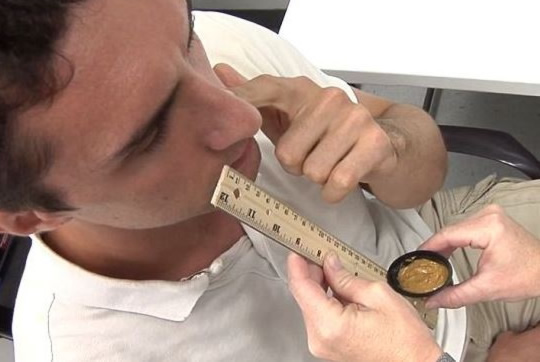 New test for Alzheimer’s requires only a dollop of peanut butter and a ruler.

Using only a ruler and a teaspoon of peanut butter, researchers at the University of Florida are developing a new test to help diagnose Alzheimer’s disease (Stamps et al, 2013).

The test relies on the fact that one of the first areas of the brain to be affected by Alzheimer’s is the sense of smell.

In the test, a patient blocks their right nostril and a teaspoon of peanut butter is moved upwards towards their nose while they breathe normally.

This is then repeated for the other nostril.

Peanut butter was used because it is a well-known smell in the US, that is both unique, and difficult to mix up with anything else.

In the study, people without cognitive problems could smell the peanut butter when it was, on average, 17cm below their left nostrils.

However, those with suspected Alzheimer’s couldn’t smell the peanut butter until it was 5cm away.

This difference in smell was only seen when those with suspected Alzheimer’s breathed through their left nostrils.

Breathing through their right nostrils, they performed the same as the control group.

The reason that it’s the left nostril, rather than the right is:

The test could provide a cheap and reasonably easy addition to other methods of detecting Alzheimer’s, which are often expensive or invasive.

The challenge, however, will be whether it can distinguish between Alzheimer’s and other types of dementia, which also cause problems with the sense of smell.

[Note: the test has not been fully investigated and is not designed for home use. Also, it’s normal to have some differences in the sense of smell through each nostril.]