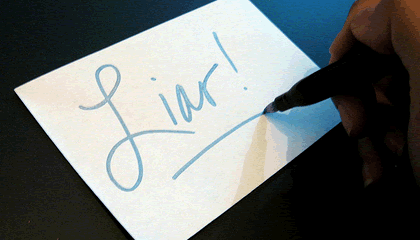 It’s hard to look someone straight in the eye and tell them a blatant lie. Those who can are marked out for more nefarious occupations. Like politics.

Over the telephone it’s easier. In a diary study 77 people recorded their everyday social interactions, noting down when they told lies and which medium they were using (DePaulo et al., 1994). Across two samples people reported telling lies more frequently over the phone than face-to-face.

The more detached people are from their interlocutor, the easier the lie becomes. This looks like bad news for both email and letters. Indeed the two forms of communication have much in common: both are written, both involve remote communication and both are a pain when you get too many of them.

But there the similarities end, especially in regard to trust. This is well-illustrated by a new study published recently in the Journal of Applied Psychology which examines how much people lie in emails compared with good old pen and paper (Naquin et al., 2010).

In their first experiment 48 participants were told they had to split $89 between themselves and a partner who they hadn’t met. The trick was that the partner didn’t know the exact size of the pot, only that it was somewhere between $5 and $100. Participants then either sent an email or wrote a pen and paper note to their partner telling them the size of the pot and the allocation.

Actually there was no blind partner, it was a test to see what participants would do in the two mediums. In the event, over email 24 out of 26 people lied about the pot’s size, while in a different group of 26 participants using pen and paper, only 14 lied.

The fact that overall so many people lied is because of the experimental set-up, rather than because these participants were pathological liars. What’s important is the difference between the two conditions: that lying increased by 50% from pen and paper to email.

How lies are justified

In some ways a more damning indictment of email from Naquin et al.’s study was that people reported feeling more justified in lying over email than they did when writing with pen and paper.

Across a further two experiments people consistently lied more over email and felt more justified in doing so, even when they were lying to someone they knew and when that person would find out. Participants seemed relatively unconcerned about the damage to their reputation caused by lying over email.

What is it, then, about email that is so different from a handwritten message?

To understand this Naquin et al. call upon a theory first put forward by eminent social psychologist Albert Bandura. Called moral disengagement theory, it tries to predict how people release themselves from their normal ethical standards, whether it’s playing fair, respecting others or telling the truth.

Two of these are (1) by changing how the offending actions are viewed and (2) by creating psychological distance from the harmful consequences of the action. Both of these are encouraged by three characteristics of email:

All of these may lead people to feel low levels of accountability for their emails. Hence more fibs.

Most people have some awareness that email is open to abuse but nowadays it’s hard to avoid doing business online. Lawyers, real estate agents and accountants increasingly report using email for negotiations, but as this study underlines, there are dangers.

Recent research doesn’t offer much solace for those hoping to spot lies in emails. Examining online communications, Hancock et al. (2008) found that liars on average wrote 28% more words than truth-tellers and also used fewer self-oriented words, but that participants were unable to use this to work out when they were being deceived.

As well as lies, negativity is another standard problem in online communication. A study of the peer review process for scientific journal articles found that academics were systematically more negative about each other’s papers when the process was conducted online (Kurtzberg et al., 2005). The same study also found that performance reviews conducted online tend towards the negative.

Although email seems almost old-fashioned given that web years, like dog years, are so compressed, our culture is still adapting to what is an incredibly useful tool. Indeed some research has suggested that people lie less over email than they do face-to-face or over the telephone (Hancock et al., 2004).

So there’s hope for the old dog yet.