Cheating: Does Deindividuation Encourage It? 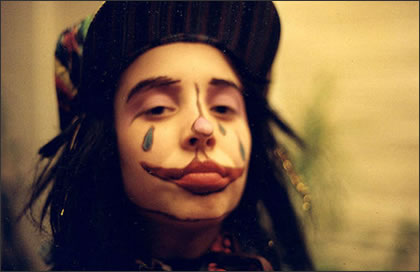 People will cheat for all sort of different reasons in all sorts of different ways — in love, in their finances and at work — but social psychologists are particularly interested in the general features of situations in which people cheat.

It’s this question that inspired Professor Ed Diener and colleagues in the 1970s to carry out a classic social psychology study of children’s honesty at Halloween.

Diener and colleagues monitored 27 houses in Seattle on the evening of Halloween, as kids came trick-or-treating (Diener et al., 1976). Just inside the door on a table were two bowls, one filled with candy bars, another with pennies and nickels. As children arrived in their costumes they were told to take one candy bar each, but not to touch the money. The host then told the children she had to go back to her research in another room. Actually, though, she was looking through a peep-hole in the door to see how much candy and/or money they would take.

But this wasn’t just a test of the kids honesty, it was a test of how various situational factors would affect what they did. Before leaving the room, each of the hosts in each of the houses created a number of different experimental conditions. The three major factors the experimenters wanted to examine were the effect of being in a group, anonymity and shifting the responsibility for any cheating:

Over the night 1,352 children entered the 27 houses across Seattle, some alone and some in groups, many emboldened by their Halloween costumes. In each house the host, after the experimental manipulation, left the room and watched the children, waiting to see how the anonymity and responsibility shifting would affect whether they cheated, and by how much.

The good news is that overall, across all the conditions, about two-thirds of the children were completely honest and didn’t take even a single extra candy bar or touch the pennies and nickels. But the effects of anonymity, being in a group and responsibility shifting were dramatic: 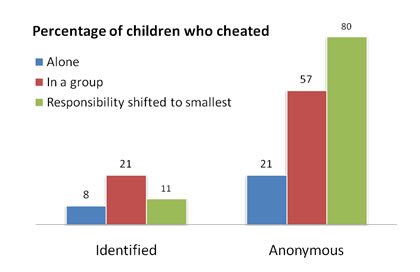 As you can see, when children came alone and were identified, only 8% cheated. However when they came in a group, were anonymous and the responsibility for any cheating had been shifted to the smallest child, the average rate of cheating shot up to 80%. The results suggested that each of the factors were not just additive but interacted with each other to encourage an even larger percentage of children to cheat.

The researchers teased out some further intriguing subtleties from the data they collected. They were also interested in why the children cheated: was it just because they were in a group, or was it also because the leader cheated and the others copied? Their results suggested there was indeed a modelling effect because in groups where the first child cheated, the other children were also more likely to cheat.

This experiment is a powerful demonstration of what psychologists call deindividuation: when aspects of situations cause people’s sense of themselves, including their ethical and moral codes, to recede and allow them to be easily influenced by the actions of others. Deindividuation may be at least partly responsible for social loafing, people’s tendency to slack off when working in a group.

But social loafing is the least of the charges ranged against deindividuation. The phenomenon has been blamed for all kinds of social disorder, especially the antisocial, destructive behaviour sometimes seen in crowds (although according to some scholars the combustibility of crowds has been exaggerated, cf. 7 myths of crowd psychology).

Whatever the judgement on deindividuation, this classic social psychology study does give us four specific situations which make people more likely to cheat: when in a group, when anonymous, when they can copy someone else and when responsibility can be shifted elsewhere. It also demonstrates that these factors can interact with each other to make it even easier for cheating to occur.