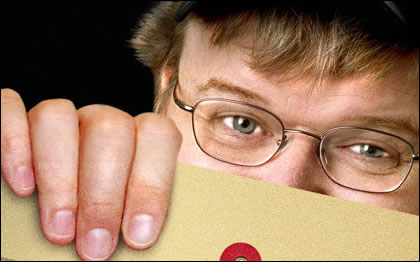 The psychological techniques of persuasion used by Moore in Fahrenheit 9/11.

Back in the Summer of 2004 outspoken documentary-maker Michael Moore brought out ‘Fahrenheit 9/11‘, his personal view of how the terrorist attacks in the US were used by George Bush to pursue illegal wars in Iraq and Afghanistan. The response to the film was huge, but rarely ambiguous – audiences either loved it or loathed it.

Some saw it as a brilliant indictment of the lead-up to an unjust war. Others saw it as unfounded liberal/left-wing propaganda designed to give the Democrats a boost in the lead-up to the 2004 US presidential elections.

Each psychological technique is explained with one example from the film. For a full explanation of the techniques and a fuller list of examples go directly to the document on his website.

Psychology: One of the most obvious techniques of any propaganda is not presenting the whole truth. As Dr Rhoads points out, “What gives omissions their power is that often not recognised as missing by their audience.” By leaving out important information people are allowed to jump to conclusions about the evidence that is presented. The propagandist has, at no point, failed to tell the truth, they’ve just failed to tell the whole truth.

Example: One of the largest omission is the failure to show footage of the terrorist hijacked planes hitting the twin towers.

Explanation: Showing this would have provoked the viewer’s anger and turned their thoughts to retribution. Instead Moore shows the aftermath, which provokes the emotion of sorrow.

Psychology: Moore is keen on juxtaposition. This uses an effect psychologists call ‘structure activation’. Simply put if you feel sad at any particular moment, that tends to colour how you interpret whatever happens to you next. In propaganda this can be used by creating a bleed-through effect from one scene to another. The emotion from one scene is used to colour how you interpret the content of the next scene.

Explanation: First scene: we see the unbelievable grief and suffering of witnesses to 9/11. Second scene cut into this: we see Bush ‘happy, smiling and confident’. How could he be smiling at a time like this? The answer is, of course, that he’s not, it’s just the way the film has been cut together to make him look foolish.

Example: The Saudis are represented throughout the film as being part of the ‘outgroup’ along with Bush.

Psychology: People tend to attribute selfish motivations to other people, and altruistic motivations to their own behaviour. On average we have a tendency to be cynical about the reason other people do what they do. It is easy to make people suspicious about someone’s motivations by simply questioning them. Intelligence operatives have an acronym: ‘F.U.D.’ which stands for fear, uncertainty and doubt.

Example: Bush is acting in his own self-interest rather than in the interests of the US.

Explanation: Bush is shown sitting reading “My Pet Goat” to school children for seven minutes after the Secret Service operative has whispered the news of the terrorist attack into his ear. The cynical assumption is that he is possibly: confused, doesn’t care, didn’t know what to do, etc.. In reality any President movements are completely controlled by the Secret Service for security reasons. Presidents are trained to wait to be told where to go by them. In this situation Bush would probably have been told to stay put while they got information on the best place to go.

Psychology: Dr Rhoads refers to this as the E.W.Y.G.Y.S. effect or: Either Way You Go Your Screwed.

Example: Bush is presented both as a bumbling fool and as a master manipulator.

Explanation: Bush is shown primping his hair at the start of the film in the moments before broadcasting to the nation. Here he, and indeed the rest of the administration, are seen as master manipulators. The points in the film were he is made to look foolish are almost endless so take your pick.

Psychology: People copy each other all the time, it’s human nature. If you stand in the middle of the street and stare up at nothing, before long you will have gathered a small crowd of people all straining their neck backwards to see the object of your fascination. If you imagine this situation in terms of people’s political point of view, then a similar transformation can be observed. If people are to watch someone else changing their point of view about something it influences them in the same fashion.

Example: One convert communicator in this film is Lila Lipscomb, a mother grieving for the loss of her son in Iraq. She appears to complete a full 180° turn in the course of the film, from supporting Bush to opposing him. From supporting the war in Iraq, to opposing it.

Explanation: Dr Rhoads uncovers evidence that there was no U-turn and it has been manufactured to aid our persuasion. She in fact voted for Al Gore in the last election and has been quoted as saying that: “Bush stole the presidency.”

Example: It is difficult to process some parts of the film whereas others such as the parts with Lila Liscomb seem only too clear.

Explanation: Those parts of Moore’s arguments that may be perceived as ‘weaker’ fly by with blaring music playing over the top. The strong parts of his argument (Lila Lipscomb) have no blaring music or fast cuts to cause distraction.

Psychology: This is an effect that psychologists often talk about in relation to Pavlov’s dog. When Pavlov fed his dog, the dog salivated and he rang a bell. After a while the dog began salivating when he rang the bell, despite the fact there was no food in sight. So the dog associated the bell with being fed.

Example: Moore shows members of the Taliban visiting Texas. The automatic assumption is that he was invited by Bush.

Explanation: Bush is shown in association with the Taliban despite the fact that Bush hadn’t in fact invited them to Texas. They were there to discuss an oil pipeline with the previous permission of the Clinton administration.

Psychology: People like statistics, they sound good. It’s been found by psychologists that people are happy to believe them and don’t bother checking them. Sounds perfect for the propagandist doesn’t it?

Example: Bush was on vacation for 42% of the time during his first 229 days in office.

Explanation: What the original statistics are referring to is the time that Bush spent not in Washington. And the implications is that, if he’s not in Washington he’s not doing any work and is therefore on vacation. Obviously not true. I’m sat at home in the UK, sitting back on the sofa as I write this so how can I be working? Perhaps I need to move to Washington for this to count as real work? This discussion is facile, but parts of Moore’s arguments revolve on this pivotal point.

“…is Fahrenheit documentary, or is it propaganda? Call it as you will. For my part, I see a consistent, effective, and clever use of a range of established propaganda tactics. If only a few of these tactics were used, or if the attempt to deceive weren’t as apparent, I might equivocate…I feel safe in applying the rule: if it flies, walks, swims, and quacks like a duck, it’s a duck.”

[Disclaimer: personally I make no political judgement on Moore’s film. It is covered here purely as an interesting study of persuasion techniques. All these techniques could just as easily be used to support precisely the opposite case.]