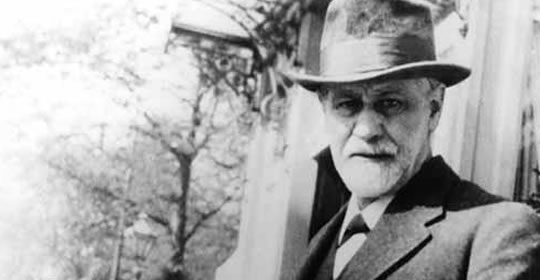 “We are effectively cognitive icebergs with most of our ‘thoughts’ occurring below the water line.”

With this, the final nomination for the top ten psychology studies, I’m rolling out a big gun: Sigmund Freud.

The strange thing about Freud is that, amongst psychologists, his stock is relatively low. One of the main reasons his work is not considered ‘scientific’ is the apparent difficulty of testing his theories. Actually there is plenty of scientific evidence for his most important finding – the cognitive unconscious – but it has taken some time to be acknowledged. Indeed Freud made some startling contributions to psychology only accepted into the mainstream of academic research in the last few decades.

“…you are travelling back to the 19th century…”To really understand the revolutionary nature of Freud’s work you need to do something for me: to forget you’ve every heard of him or his ideas.

Just lie back…relax….feel the pressure of my hand on your forehead…and as you do so you’ll forget that there are processes in our minds to which we don’t have access…that’s it….breeeeeaaatthe….and forget that we often don’t know the reason why we do the things we do…..in……out…..in….out…..forget, even, all the things you know about psychology…now you are travelling back to the 19th century and here is a smartly dressed young man looking at you with bright intelligent eyes…and that smell…pungent….cigars?

Frau Emmy von N. was one of the earliest patients to be treated with the nascent techniques of psychoanalysis. Frau Emmy suffered from a series of tics, some facial, the most obvious of which was a loud ‘clacking’ noise. To Freud the symptoms she showed were typical of hysteria and he soon set about treating her with his strange new methods.

What then did these past events in Frau Emmy’s life signal to Freud? What was the connection to her current symptoms? At this time Freud had begun to develop a theory that physical symptoms could be caused by thoughts not available to the conscious mind. His treatment – the talking, the hypnosis, the hand on the forehead, the free association, the couch – all were designed to try and access this so-called ‘unconscious’ world, to find the root-cause of distress. Once this root-cause could be identified and explained, Freud thought, the physical and psychological symptoms would be alleviated (Breuer & Freud, 1893).

The fact that this idea is no longer considered radical is testament to the last few decades of research which have shown the importance of unconscious processes. We now have abundant evidence for unconscious processes in the operation of memory, affect, attitudes and motivation (Westen, 1998).

And so, far from being unscientific and untestable, Freud’s theory of unconscious mental processes was incredibly prescient. It laid the ground for some of the most important lines of research in psychology today. Research that tells us more and more about what it means to be human.