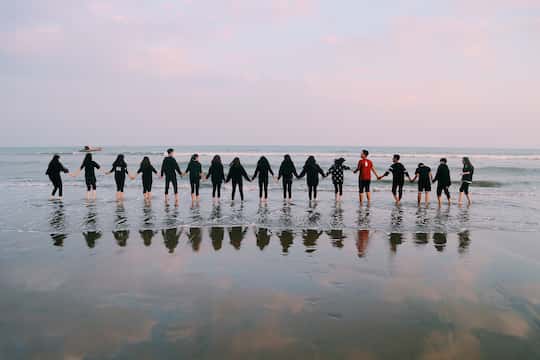 Teamwork is more important than ever — especially now that some of it has moved online.

Failures in teamwork have caused accidents in nuclear power stations, planes to crash and businesses to fail.

Many organisations are trying to do more with less by relying on the efficiency of teamwork.

However, a collection of individuals doesn’t become a team just because it’s a called ‘a team’.

There are a whole range of psychological processes that need to be nurtured in order for ‘teamwork to make the dream work’, as the saying goes.

While all teams are different, there are some universals that all teamwork need, or at least can benefit from.

Here is what psychologists have discovered over the decades:

Surely if you want to build a fantastic group whether online or offline, you put the smartest people together?

In their study, 699 people were observed working in groups of two to five.

They found that the intelligence of the group is…

And this finding is not an isolated one.

The importance of social skills emerges in the research again and again.

So, it’s not about putting all the biggest brains together, it’s thinking about the social dynamic:

“If everyone is moving forward together, then success takes care of itself.” – Henry Ford

Since women’s social skills tend, on average, to be a little stronger than men’s, including women is one way of prioritising social skills for better teamwork.

But, that doesn’t mean you should take it to the logical extreme and build women-only teams: it’s all about the mix.

Similarly, this Credit Suisse Research Institute report found that companies with at least some female board members have better share price performance than those that are men-only.

So, it makes sense to mix up the genders for effective teamwork.

“A diverse mix of voices leads to better discussions, decisions, and outcomes for everyone.” — Sundar Pichai

It’s very hard for people to work together effectively if they don’t trust each other — and this can be even harder online.

They also have to appear trustworthy to others or it may be difficult for them to do their job.

Teams that appear more trustworthy (hopefully because they are!) have been shown to perform better when negotiating with other groups (Naquin & Kurtzberg, 2009).

After all, would you do business with a team you don’t trust?

Not if you can avoid it.

The problem is that in groups people perceive the trustworthiness of the group by assessing the least trustworthy member.

So, in terms of trustworthiness, one bad apple really can spoil the bunch.

“Teamwork begins by building trust. And the only way to do that is to overcome our need for invulnerability.” – Patrick Lencioni

If group members don’t seem to trust each other, then perhaps it’s humour that’s missing.

One study by Professor William Hampes has found that people whose sense of humour is stronger are rated more trustworthy by others (Hampes, 1999).

Similarly, when teamwork is strong, people start joking around together and will tend to talk to each other outside work.

Humour can be a signal that groups are getting along and can even help create that buzz that makes some group’s teamwork so effective.

Some studies have even found that humour can increase teamwork performance and the effectiveness of leadership.

It has to be the right type of humour though—not (all) put-downs.

“If you can laugh together, you can work together.” – Robert Orben

We tend to think of the extroverts as superior at teamwork: they mix better, pipe up more in meetings and generally seem to be getting on with others more smoothly.

But introverts have their place in effective teamwork as well.

Introverts certainly don’t blow their own trumpets and aren’t often noticed at the outset, perhaps even more so online, yet eventually the group comes to value them.

That’s what Bendersky and Shah (2012) found in their study of introverts and extroverts working together.

In general, as the team evolves, extroverts do worse than people expect and introverts do better.

The quiet ones can come through in the end to boost teamwork.

“Great things in business are never done by one person; they’re done by a team of people.” – Steve Jobs

One of the greatest barriers to effective teamwork is pretty simple: they don’t know what the goal is.

This problem can be even worse when teamwork is carried out online.

A study of 500 managers and professionals in 30 different companies found that it was an unclear vision of the goal that was stopping them performing effectively.

But, it is not only goals that must be defined for good teamwork…

“There is immense power when a group of people with similar interests gets together to work toward the same goals.” – Idowu Koyenikan

OK, everyone knows the goal, but do they know what they’re supposed to be doing to achieve this goal?

It seems like a pretty basic step, yet it’s frequently unclear to team-members exactly what their role is.

Unclear roles become particularly problematic when the situation changes and teamwork has to adapt.

If the roles aren’t clear then each person doesn’t know what they’re supposed to be doing.

And that’s a recipe for disaster.

“The way to get started is to quit talking and begin doing.” – Walt Disney

For people to work together effectively, in particular online, they need to know what the story is in a more general sense.

Where have we come from and where are we going?

It’s about more than just goals and roles, it’s about the assumptions we are using and the knowledge that we share (or don’t).

Psychologists sometimes refer to these ‘stories’ as mental models.

We construct these mental models of the world outside to help us navigate it and work out what to do next.

When the mental models of groups are better aligned, they perform better.

For example, Westli et al. (2010) found that when medical staff at a trauma centre shared mental models their performance was better, over and above specific teamwork skills.

People who share the same story are more likely to know what to do automatically, almost without thinking about it.

Psychologists call this implicit coordination and it is the key to great teamwork.

“It is the long history of humankind (and animal kind, too) that those who learned to collaborate and improvise most effectively have prevailed.” – Charles Darwin

When teams make mistakes, one of the most common reasons is that they failed to communicate effectively.

In complex environments, information will often be coming from many different sources online and off — this makes teamwork harder.

We’re all awash in information nowadays, or maybe drowning is a better word; emails get cc’d to everyone, and who knows what’s important?

Teams that perform best clearly communicate the most important information before they’ve even been asked for it and filter out the junk.

“The kinds of errors that cause plane crashes are invariably errors of teamwork and communication.” — Malcolm Gladwell

Naturally it’s about motivation, structuring tasks, analysing what needs to be done, allocating goals and so on, but it’s more than that.

The best leaders are also trying to nurture their teams by addressing some of the soft skills above.

They are getting the mix of personnel right, encouraging concise communication, spreading the group’s story, using humour and building trust.

How do you do that? Well, leaders aren’t all born, some are made.

So you can learn the right way (How To Be a Great Leader) and the wrong way (7 Reasons Leaders Fail).

“Leadership is about making others better as a result of your presence and making sure that impact lasts in your absence.” — Sheryl Sandberg