Pick Up Lines: The Best Type For Men And Women 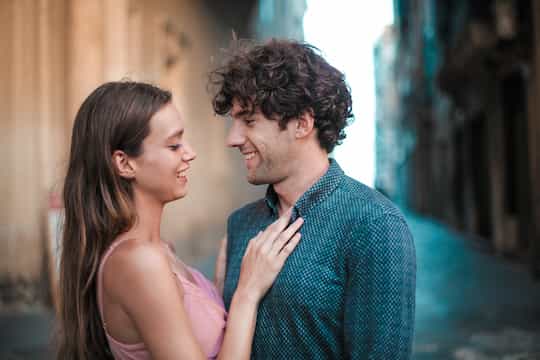 Men’s choice of pick up lines may help quickly select for women with particular personalities.

When it comes to the human mating game, men are often portrayed as having little power or guile.

Research finds it is women that control early interactions, from first signalling the man to approach to deciding whether to engage in sex.

One area in which men are popularly seen as especially inept is in their choice of pick up lines.

Leading the field in crass openings are sexually-loaded remarks.

Indeed, a study by Chris Bale from the University of Central Lancashire found that sexually-loaded remarks were the type of openers least likely to lead to further interaction (Bale, 2006).

Which begs the question: why do men still use them?

Pick up lines as selection tool

An ingeniously simple answer is suggested by both Bale (2006) and Cooper et al (2007), with some evidence to back it up.

Pick up lines may be a way for men to select for a particular type of woman.

In other words, men using sexually-loaded remarks are looking for a certain type of woman.

Similarly, at the other end of the scale, men who use character-revealing or culture-based pick up lines are probably trying to show they are a good mate looking for a long-term partner.

That’s the theory and here’s how Cooper and colleagues searched for evidence.

The study first asked participants to consider a series of scenarios in which men tried to strike up a conversation with a woman.

In each the man used a different type of pick up line.

Participants were then asked to rate how likely it was the conversation would continue on the basis of that pick up line.

These pick up lines were collated from a variety of sources and clustered into the following categories:

So, now we know, generally speaking, how our female participants react to these four broad types of pick up lines.

Next we need to find out what types of men the female participants prefer.

For this they completed the Dating Partner Preference Test.

An analysis of these results suggests women see men as generally falling into one of four types:

Along with these vignettes and the Dating Partner Preference Test, participants were asked to fill in personality measures of their psychoticism (tendency for inappropriate emotional responses and recklessness), extraversion (being outgoing, gregarious, externally oriented) and neuroticism (the tendency to experience negative emotional states).

Now we’ve got all the information we need to see if there’s any connection.

Looking at the correlations shows there is support for the idea that pick up lines select for women with particular personalities.

It does seem, then, that the type of pick up lines men choose does have a measurable effect on the type of women who respond to them.

This can effectively allow men to make a quick assessment of a woman’s personality by their response to a particular type of approach.

Those looking for a ‘bad mate’ might use a sexually-loaded remark or a compliment, while those wanting an extrovert should use a joke.

I have focussed on women’s perceptions of male pick up lines as in most cultures it’s mostly the men using the lines, although this is changing.

Perhaps to reflect this men’s perceptions of women’s pick up lines were also included in this study.

The results for men’s perceptions showed that in comparison to women, men were more likely to prefer pick up lines involving sex (surprise surprise!) as opposed to women who preferred humour.

Men also tended to be worse than women at judging what types of pick up lines women prefer.

The types of pick up lines whose effectiveness was under-estimated by men were those involving offers of help to women, handing control of the interaction to women and (subtly) displaying wealth (surprise surprise!).

Examples of direct pick up lines

Perhaps it comes as no surprise that men prefer pick up lines to be direct.

But, do men and women agree on what a direct approach is and why such directness is necessary in the first place?

These questions are addressed in a study published in the journal Personality and Individual Differences (Wade et al., 2009).

Forty women aged between 19 and 22 were asked to list the types of pick up lines they might use to signal their interest in dating a man.

Researchers sorted these pick up lines into 10 categories, then 40 men and women rated them in order of perceived directness.

Here are the 10 categories (with examples) from most to least direct pick up lines:

Then men were asked which pick up lines they thought would be most effective for women to use on them.

They pretty much put the pick up lines in order of directness, with the most direct also perceived as the most effective.

When women were asked to do the same they produced a similar list with one exception.

Women didn’t rate as highly giving out phone numbers or asking for a call.

The only surprise is the low ranking of funny or sexual humour.

This relatively low rating for a jokey approach is another thing shared by both sexes.

Previous work by Bale et al. (2006) found that women weren’t particularly impressed with men trying to be funny, despite what we are often told.

It seems opening lines are a serious business for both sexes.

Why men prefer women to be direct

The interesting question, although it may seem easy to answer, is why do men prefer a direct approach?

Two obvious answers are men’s purported inability to read body language or an assumed distaste for reading situational subtleties (in other words: too stupid or can’t be bothered).

But researchers in Germany provide us with evidence for an alternative explanation.

Grammer et al. (2000) videotaped opposite sex pairs meeting for the first time to catch the nuances of body language in the first 10 minutes of an interaction.

Afterwards women were asked how much interest they had in the man they’d been talking to.

Women may think they are sending out all the right nonverbal signals and may blame men for failing to pick up on them.

But from a man’s perspective there may often be little to pick up on because women, being polite, are always sending positive nonverbal signals.

While it’s not good practice to generalise too much from one relatively small study of 45 participants whose age ranged from 18 to 23, the results accord with what men say anecdotally: they often can’t tell if women are interested or not because the signals are too ambiguous.

So subtlety is out and it’s back to the age-old problem for both men and women: who has the guts to risk rejection with the direct approach?