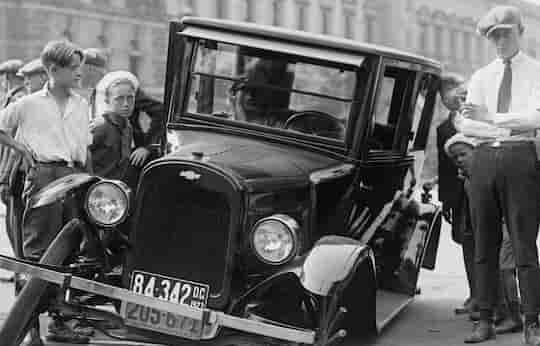 The misinformation effect in psychology refers to the way memories can be changed after the event we are remembering.

The misinformation effect in psychology is the tendency for people’s recall to get less accurate when they are given more information afterwards.

in other words, someone’s memories can be altered after the event by things that other people say or do.

This is particularly important in areas like eyewitness testimony, which could determine criminal guilt.

Imagine a witness is asked misleading questions which cause their memories of the event to be warped — someone’s life could hang in the balance.

The misinformation effect occurs because of two of the sins of memory: misattribution and suggestibility.

The misinformation effect is also important in more mundane circumstances, such as people’s personal histories.

For example, I have a memory from when I was three years old of playing in a sandpit.

I don’t remember much else about it other than this sandpit was outside the building in which I lived.

For years I used to think this was my earliest memory, now I’m not so sure and here’s why.

The work of Elizabeth Loftus, a renowned expert on human memory, has been extremely influential in this area as one of her early studies demonstrates.

Like some of the best experiments, although Loftus and Palmer’s (1974) study on the misinformation effect was quite simple, its implications were profound.

In the first of two experiments, 45 participants watched a film of a car accident.

Nine of these were then asked this specific question: “About how fast were the cars going when they hit each other?”.

The other four groups of nine were asked an almost identical question but with one important difference.

Instead of the word hit, the words ‘smashed’, ‘collided’, ‘bumped’, and ‘contacted’ were used.

The wording of question changed the answer

The participants who were asked the question using the word ‘smashed’ as opposed to ‘contacted’, estimated the cars were travelling, on average, almost 10mph faster.

The other words were fanned out in between.

So, what is this telling us?

Probably, that because people are not good at gauging the speed of a car, the cue comes from the experimenter.

If the experimenter asks the question using the word ‘smashed’, the participant assumes it was going faster than if they say ‘contacted’.

The misinformation effect after one week

It’s in the follow-up study that things get interesting.

The same experiment was repeated roughly as before, but with 150 participants.

This time, however, participants filled out a questionnaire about the crash and were then asked to return in a week.

As before, the question about the speed of the crash was varied between groups.

One week later participants returned and were asked to fill out a questionnaire about the accident in which was hidden a crucial question: “Did you see any broken glass?”.

As broken glass is indicative of a more serious accident, so greater speed, Loftus and Palmer expected the group in which the word ‘smashed’ had been used would be more likely to indicate there was broken glass.

This was exactly what they found.

What causes the misinformation effect

There are a number of different theories as to why the misinformation effect occurs.

Several factors can influence the misinformation effect, which include:

Reporting their experiment Loftus and Palmer adopt a cautious tone as befits a journal article.

For them it is a replication of a fact already known.

That the phrasing of a question about an event can affect our memory for that event.

For me, although the experiment is deceptively simple, it goes to the heart of how memories are constructed.

It makes me wonder if that childhood sandpit in my mind’s eye is really something I can remember.

What about your childhood memories?

What about your memory for last week?

To what extent are things you remember happening a week ago affected by intervening events and people?

The beauty of Loftus and Palmer’s experiment is it shows how important other people can be in shaping our own memories.

Whether or not my memory is real or a construction isn’t so important in the context of that sandpit, but what if I’m an eyewitness to a serious crime, called to testify in court?

What if an adult ‘recovers’ a memory of being abused by their parents as a child?

The answers to these questions have vital impacts on the lives of all those involved.

Loftus’ later work has taken in both of these highly controversial questions, and more.

Do I really remember that sandpit?

I can see myself sitting there, playing, looking up past the building, into the sky.

If that memory is false, can I ever really remember anything true at all?

How to avoid the misinformation effect

A number of strategies have been suggested to fight the misinformation effect: