Bigger Brains Are Better, But Only Slightly 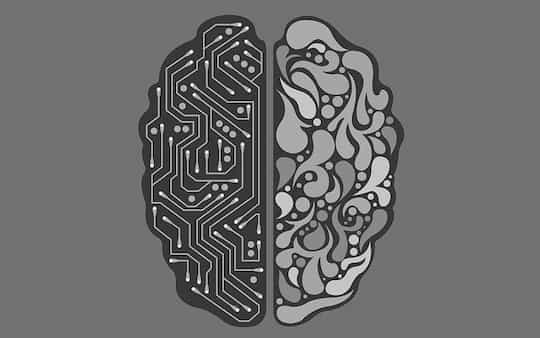 People with a bigger brain score better on cognitive tests, but the association is extremely small.

The brain scans revealed that people with larger brains do indeed score better on cognitive tests.

However, the association is only very small, explained Dr Gideon Nave, the study’s first author:

“On average, a person with a larger brain will tend to perform better on tests of cognition than one with a smaller brain.

But size is only a small part of the picture, explaining about 2 percent of the variability in test performance.

For educational attainment the effect was even smaller: an additional ‘cup’ (100 square centimeters) of brain would increase an average person’s years of schooling by less than five months.”

Men have bigger brains than women

Men’s brains are, on average, 7 percent bigger than women’s brains.

So, are we saying that men are, on average 7 percent more intelligent than women?

“Just like with height, there is a pretty substantial difference between males and females in brain volume, but this doesn’t translate into a difference in cognitive performance.”

In fact, there is very little measurable difference between men and women in their IQ, despite men having larger brains.

The disparity may be explained by some studies that find that the cerebral cortex is thicker in women.

The cerebral cortex is the outermost layer of the brain, which does most of our high level thinking.

“This might account for the fact that, despite having relatively smaller brains on average, there is no effective difference in cognitive performance between males and females.

And of course, many other things could be going on.”

The problem of a bigger brain

Despite all this, the link between a bigger brain and intelligence is certainly attractive in the first instance.

For example, imagine you measure both the bodies and brains of all the primates on Earth bar humans: beasties like bonobos, chimps and gorillas.

Then, using this ratio and based on the average human’s size, you estimate how big a human brain should be.

To check your estimate you decide to open up your friend’s head to take a peek inside.

When you do, you’re mighty surprised to find a brain about three times larger than you were expecting.

“Aha,” you say, “This is where our amazing capacity for language, emotion, social organisation and creativity comes from.”

Naturally, then, it’s an attractive idea that the bigger the brain, the more able the animal.

This argument soon breaks down, though, when you try chatting to an elephant – an animal with a brain three times the size of ours.

OK, you might say, it doesn’t work across species, but maybe it works within species.

Well, now trouble is not far away, and here’s two reasons why:

So you see the kind of dangerous, shark-infested waters we’re now swimming in?

This is no longer just science, it’s political; with claims to the answer potentially being seen as both sexist and racist.

A bigger brain not significantly better

This is why I’m more than a little relieved to report the view of neuroscientist Dr David P. Carey who has reviewed the research in this area and finds little evidence for the claim that bigger brains mean greater abilities (Carey, 2007, p. 119).

He argues that the evidence from neuroimaging, behavioural genetics and comparative cognition is largely unconvincing:

“I have little confidence that looking at a sophisticated twenty-first century brain scan (in any number of impossibly sophisticated ways) of a collaborator, competitor or any old conspecific [other human] is going to tell me anything meaningful at all about their capabilities to perform in any cognitive way, psychometric or not.”

A second layer of scepticism about the bigger brain/intelligence connection is captured by an old joke that goes like this:

The joke expresses a scepticism many harbour towards measures of intelligence.

Does intelligence really tell us anything useful about a person, or does it just tell us how good they are at taking intelligence tests?

The jury is very much out on this point.

The originators and manufacturers of intelligence tests will tell you they are good predictors of people’s real-world performance, while many others are not so sure.

The default position should be a high level of scepticism about any claims for a relationship between a bigger brain and ability.

So, there you have, confirmation of the oldest defence in the book: it’s not how big it is, it’s what you do with it.