Pets In Bed: Study Reveals If It Helps or Hurts Sleep 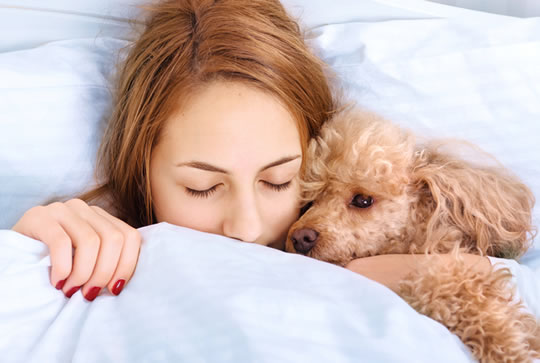 Is having a pet in bed beneficial for sleep?

Having a pet in the bed may benefit some people’s sleep, a new survey suggests.

The conclusion comes from 150 patients at the Mayo Clinic’s Center for Sleep Medicine in Scottsdale, AZ.

They found that just over half of pet owners allowed their pets into the bedroom.

One-fifth of those reported some disruptive behaviours like whimpering, wandering and snoring.

But 41% said their pets did not disrupt their sleep, with some claiming it helped them sleep.

One single 64-year-old woman spoke of feeling more confident with her dog in the bed at her feet.

Another woman said her two small dogs were good bed-warmers.

A cat lover described the animal as providing a soothing presence.

“The value of these experiences, although poorly understood, cannot be dismissed because sleep is dependent on a state of physical and mental relaxation.”

The researchers note, though, that pet owners could have been biased in their responses:

“Respondents appeared eager to disclose whether they owned a companion animal and where it slept but seemed more reluctant to reveal any undesirable consequences.

This response bias may have resulted in these data underreporting the frequency of disrupted sleep.”

“Many pet owners view companion animals as family members that they wish to incorporate into as many aspects of their life as possible.

Because humans spend considerable time sleeping, a pet owner’s desire to have animals close at night is understandable.

As more households include multiple pets, the challenge of securing appropriate sleeping arrangements is increased.”

The study was published in the journal Mayo Clinic Proceedings (Krahn et al., 2015).

Pet in bed image from Shutterstock